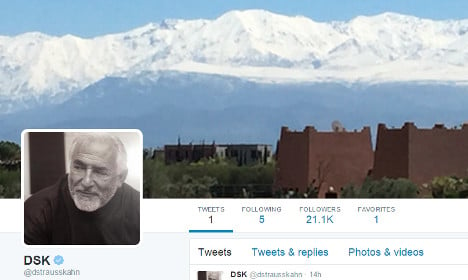 Is DSK making a comeback via Twitter? Photo: screengrab/Twitter

DSK, despite his fall from grace and recent humiliation during his pimping trial earlier this year, can still pull in a crowd.

A new Twitter account was set up on Sunday under the name of the man once tipped to be French president and quickly garnered 21,000 followers.

DSK himself has not confirmed that he indeed is @dstrausskahn, but a note on Twitter says the account is certified.

The fact that DSK, recently cleared of all pimping charges after his trial in Lille, has taken to Twitter may not be that surprising in this day and age, but it was his first tweet that has got the French media and his sudden legion of followers buzzing.

“Hello Twitter! Jack is Back” read the words, written in English, that have since been retweeted nearly two and a half thousand times.

Most believe the tweet is a nod to Jack Bauer, star of the hit series 24 and may suggest that DSK intends to make a return to the political scene in one way or another.

The reactions were fast and sometimes furious and probably need a NSFW (Not Safe for Work) label.

While DSK has quickly bagged thousands of followers, the account itself only follows five – those of economists Joseph Stiglitz and Paul Krugman, The Economist and Financial Times news sites, as well as that of is partner Myriam L’Aouffir.

All eyes are on any following tweets that may confirm whether the ex-IMF chief has really taken to Twitter to launch a comeback or whether it’s just a big hoax.