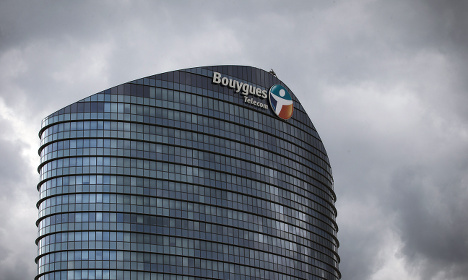 Drahi already owns France's second-biggest telecoms operator Numericable-SFR as part of his Altice group, and acquiring the telecoms division of Bouygues construction and media conglomerate would give him a dominant position in the sector.

Bouygues's board will examine the offer “at the start of the week,” sources with knowledge of the negotiations told AFP.

Another source specified the board would discuss the issue on Tuesday.

News of the offer was first reported by French newspaper, Le Journal du Dimanche (JDD), which cited unnamed sources saying: “The negotiations are continuing this weekend with Martin Bouygues, the group's CEO, demanding an improved offer (by Drahi), to 11 billion euros.”

But the government is not keen to see less competition in the mobile phone sector, where a busy playing field has kept prices low for consumers.

“Now is not the time for opportunistic tie-ups which may be of interest to some people but which are not in the public interest,” Economy Minister Emmanuel Macron told AFP.

“I say and I repeat that consolidation is currently undesirable for the sector,” he said.

“Jobs, investment and better customer service are the priorities,” Macron said, adding that recent cases in Europe had shown telecoms mergers to have a “negative” impact.

According to JDD, the deal may not be a straight takeover of Bouygues Telecom but more a dismantling of its assets.

The paper reported that another telecoms company, billionaire Xavier Niel’s Free, would get some of Bouygues's mobile frequency, antennas and shops, while some of its employees may end up at market leader Orange.

An Orange spokesperson told AFP on Sunday that it was not currently party to any discussions on the offer, but said it “remains open to discussions with other actors to see if we can facilitate a deal”.

Drahi, whose media interests include a majority stake in the French daily Liberation and L'Express news weekly, as well as owning the Israeli TV station i24 News, has been on a telecoms buying spree over the past year.
In March 2014, Altice won a bidding war with Bouygues for SFR, France’s second largest mobile operator, which it then merged with its Numericable cable operation.

In May this year, Drahi made a foray into the US market by buying 70 percent of Suddenlink Communications, the seventh-largest US cable company.