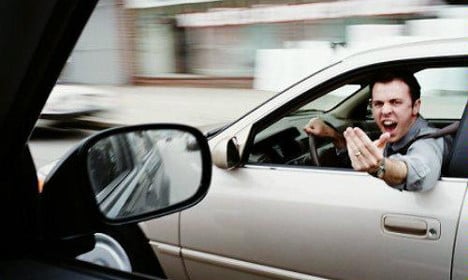 One of the things the French should give up: Beeping! Photo: Irish Typepad/Flickr

Ecology Minister Ségolène Royal said on national television this week that the French should give up Nutella in order to save the planet.

The comment made international headlines, and she ended up having to apologize after offending Italy – the home of the spread.

But there's a few other traditions or habits the minister could have added to her list for one reason or another.

Here are eight things that the French should think about giving up, but probably won't. It might sound hard to believe, but bullfighting is still alive and kicking in south west of France (although its illegal elsewhere in the country).

This isn't really bad for people's health (at least the French aren't running with them through the streets like in Spain), but it's bad for the bull's health.

But maybe things could change. Earlier this month, a French court ruled that the tradition of “La Corrida” should indeed be taken off the national list of cultural heritage. The ruling was certainly good news for anti-bullfighting campaigners, and perhaps could mean a ban is in the pipeline…but there's no sign of it coming, especially with the Spanish born PM Manuel Valls being such a fan of the spectacle.
Lifelong politicians

(Photo: AFP)
There is very little renewal going on when it comes to France's politicians. Opposition leader Nicolas Sarkozy and President Francois Hollande are both 60 and have both been in the game for a while. Sarkozy has had his turn as president and yet could return to the Elysée in 2017  if he pulls off his comeback. That's even despite all the scandals he's had to deal with.
Compare this to the political scene across The British Channel, where two party leaders stepped down after the recent election and may never be seen in politics again.
French politicians have a habit of staying around despite defeat or scandal. Alain Juppé, is also in the running for the Elysée. He wasn't that popular as PM between 1995 and 1997 and he was convicted for misuse of public funds back in 2004. Yet he may still become president.
And even the French are sick of it, with three quarters recently saying that they don't want Sarkozy or Hollande as their next president. A bit of fresh blood could work wonders for France…
Smoking (Photo: AFP)
Before long, people will look back at 2015 and say “I can't believe people smoked so much”. Well, we hope so anyway.
But in France, smoking is still a cool thing to do, well at least among young people and pregnant woman.
France's Health Misister Marisol Touraine is concerned.
The government is taking drastic measures to try and get the French to butt out, like upping the price of a packet, compulsory plain packaging, increasing the fine for tossing butts, and banning smoking in terraces and in cars with children, but people still light up.
Recent figures showed that almost one in five French women will continue to smoke throughout their pregnancy, while another set of fresh stats showed that 33 percent of 17-year-old boys and 32 percent of girls the same age smoke daily.
Foie Gras (Photo: AFP)
You'd think that with the sheer amount of controversy surrounding foie gras  it would already have been banned, but no, it's still a popular delicacy across France.
While the force-feeding method of filling up the liver's of the ducks and geese — a practice known as “gavage” —  is the reason its banned in many countries, it's still a totally legal practice in France.
If you've ever seen a video showing the process of force feeding you'll probably be of the view that it's high time France took a similar stance.
But can you imagine them doing it?
Binge-drinking (Photo: I woke up Today/Flickr)
France doesn't want to let it's town centres become like those in Britain or the Costa del Sol on a Friday night.
The French should stick to a little wine at lunch and dinner every day rather than eight pints, six shots a kebab and vomit.
Le binge-drinking, directly imported from Anglo culture, is becoming such a big deal among the young people in France that they've even had to come up with a word for it – “le beuverie express”.
In fact, 46 percent of French people between the ages of 18 and 25 have done it at least once in the last year, recent statistics show, and that's compared to just 33 percent ten years ago.
The French Minister of Health wants to nip it in the bud and has come up with new measures to fight binge drinking, which includes possible fines and prison time for anyone who caught inciting minors to get drunk.
Paying by cheque Cheque books, remember those?
You might not have used one since the 1980s but they are still widely used in France.
In France, the answer is no, and the cheque culture is very much alive in France, believe it or not. When you consider how effortless it is to pay by card, it's a wonder cheques even exist anymore.
The worst bit, by far, is having to write all the numbers out (in word form) by hand. Might not sound so bad, but compare 99 to quatre-vingt-dix-neuf and so on, and you'll be begging to pay by card too.
Tu and Vous
Let’s face it, the whole tu and vous distinction causes so many problems, not just for foreigners but for the French themselves. Isn't it time the French just choose one form of address?
Think of all the time and stress it would save. All that confusion, all that wasted energy. There are more important things to get on with in life.
And lastly… Car and scooter horns (Photo: Irish Typepad/Flickr)
Ok, this one is a bit of a gripe, but it the big cities of France it really seems like there's too much beeping. Of course, there are worse places in the world for sure, but nothing is more irritating than walking down the street while a motorist literally holds down the horn until another driver reacts.
Worse is when the second driver starts beeping in return. We're not calling for a ban on car horns, but maybe a reduction in their volume?