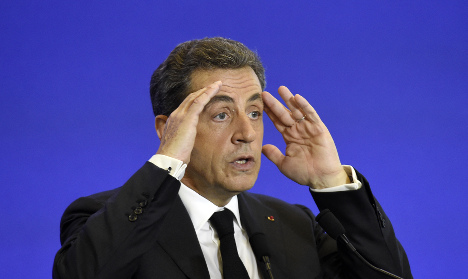 The comments in question were made by Sarkozy, now head of the opposition Republicans, during a public meeting in a Paris suburb.

The former president railed against the European Commission's plan to divide up the asylum seekers arriving in their thousands in the waters off Italy, Greece and Malta aboard rickety, overcrowded boats from North Africa and the Middle East.

He compared the migrant problem to a domestic water leak, using a metaphor to describe his opposition to the EU's plans.

“The pipe bursts in the kitchen and the repair man comes and says: 'Ive got the solution. We'll keep half the water in the kitchen and put a quarter of it in the living room and the other quarter in the parents' bedroom. If that doesn't sort things out then the rest can go in the children's room,'” Sarkozy said.

The ruling Socialist Party retorted that “with Sarkozy it's the French Republic that takes on water.”

Italy's European Affairs Minister Sandro Gozi was also critical, saying Sarkozy's comments were “even more regrettable when you think of the tragedy that thousands of people have been drowned in the waters of the Mediterranean.”