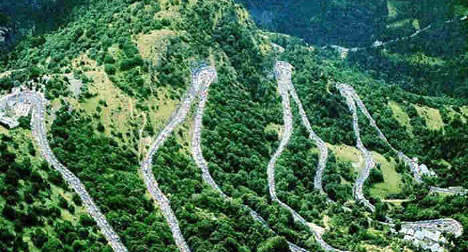 The famous Alpe de Huez stretch of road that is threatened by a landslide.

Tour de France planners are scrambling to find a solution to a landslide threatening the 20th and penultimate stage, the
feared climb to L'Alpe d'Huez, where 250,000 tonnes of dirt and rock appear ready to fall.

“The stage itself is not under threat, that's for sure, the Tour de France will get to l'Alpe-d'Huez,” said regional governor Jean-Pierre Barbier.

“We're just not sure how yet.”

The problem lies with the section of the climb above Lake Chambon where a 250,000-tonne heap is moving forward at 10cm per day and which geologists predict will turn into a full blown landslide by early July.

A plan for a five-million-euro alternative road has been approved and work is due to begin once central state authorities give it the green light.