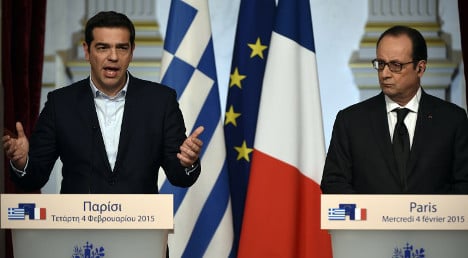 France's president François Hollande, seen here with Greek PM Alexis Tsipras, has called for a deal to be made. Photo: AFP

We must “do everything to relaunch negotiations, so the talks can achieve a compromise, but one in line with European rules,” said the French president following talks in Bratislava with his Slovak counterpart before speaking with German Chancellor Angela Merkel later in the day.

Eurozone leaders will gather in Brussels just a few days before an EU summit involving all 28 heads of state and government later next week.

Hollande said Monday's emergency eurozone summit would be “crucial”. “I don't want us to meet only to come to the conclusion that we have failed,” he said.

EU President Donald Tusk called a summit of the leaders of the 19 eurozone countries on Monday in Brussels after finance ministers on Thursday failed to break the five-month-old deadlock between the anti-austerity government in Athens and its EU-IMF creditors.

Greece has until the end of June to agree a reform deal in order to secure the remaining portion of its multi-billion-euro bailout, which it needs to avoid defaulting on a 1.6-billion-euro IMF debt payment.

Hollande's plea comes after the acrimonious breakdown of talks between finance ministers in Luxembourg on Thursday night, which has once againraised the prospect of a Greek exit from the eurozone.

On the eve of those talks France's finance minister Michel Sapin had warned that any collapse in talks would be “very serious for Greece but also extremely serious for the European project.”

The mmeeting in Luxembourg, seen as one of the last chances to save Greece from possible default, but now the emphasis will shift to Monday's summit showdown in Brussels on Monday.

Talks between Greece and its international creditors to release the last €7.2 billion ($8.1 billion) slice of rescue funds from Greece's massive bailout are in deadlock with key deadlines looming.

“The Greek government should make proposals… to show that Greece is prepared to make additional efforts, less strenuous than what was previously asked for,” he said.

“We too, who are negotiating with the Greek government, we also need to live up to our responsibilities,” the minister said.

“We all need growth, we all need more jobs, Greece as well as the other countries in Europe. We have a common fate… a common interest in finding a deal,” he said.