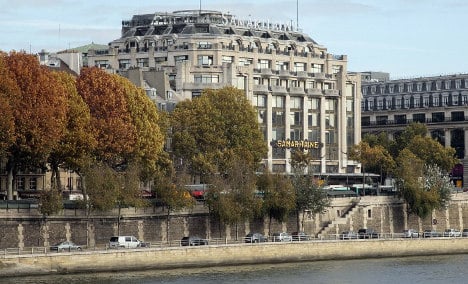 Parisian department store La Samaritaine. Photo: AFP
Perched on the right bank of the Seine, the hulking store occupies some of the most expensive real estate in Paris but was shut down in 2005 when it ran afoul of health and safety regulations.
Efforts to redevelop the site have hit several snags, notably over plans by Japanese architecture firm Sanaa to build a massive undulating glass facade over a part of the building, which is now owned by luxury brands company LVMH.
But on Friday the State Council, France's highest legal body, gave a green light to the renovation project, saying it “did not break” local planning regulations.
LVMH — which owns brands such as Louis Vuitton — plans to turn the complex, including the main building and three adjacent properties, into a five-star hotel, offices, shops and flats at a cost of some 460 million euros ($520 million).
Paris mayor Anne Hidalgo welcomed the decision, saying it would create 4,400 jobs.
“By 2018, all Parisians and visitors will be able to visit this new exceptional site, which will contain shops, a hotel, low-cost housing, a creche and offices,” said Hidalgo in a statement.
Critics complained the design would be an eyesore, ruining the glorious banks of the River Seine, and heritage groups filed a complaint over the design plans.
In May 2014 a court cancelled one of the renovation permits, saying the glass wall “clashed” with the look of the other buildings in the area.
The administrative appeals court then upheld the cancellation of the permit, saying the new building “did not comply with the obligation to fit the planned construction into its urban surroundings.” (Photo: AFP)
– Novelties shop –
La Samaritaine, a Paris landmark, had its golden age during the 1930s at the height of the Art Deco era but went into decline for the last 30 years of its existence.
It had its start in 1870, when Ernest Cognacq, a hawker from the west coast of France, opened a small “novelties” shop on the banks of the Seine.
He called it La Samaritaine (the Samaritan woman) after a pump on the nearby Pont Neuf whose facade depicted Christ and the woman of Samaria at Jacob's Well, as recounted in the Bible.
He would later buy up adjoining buildings until the store covered 70,000 square metres (750,000 square feet).
However the business piled up losses and in 2001 was bought by LVMH, owned by France's richest man Bernard Arnault.
He was forced to shut it down after a police report said the whole art deco structure needed to be urgently renovated to replace antiquated electrical circuits, malfunctioning smoke extraction systems and flammable wooden flooring.
The renovated Samaritaine was supposed to have opened in 2013 but this has been pushed back several times.
Renovation work will now be able to be continued, as the decisions of the State Council may not be appealed.
LVMH said it was “satisfied” by the ruling in its favour.
“Samaritaine will now be able to restart this ambitious project to rehabilitate and renovate the whole site,” the firm said in a statement.