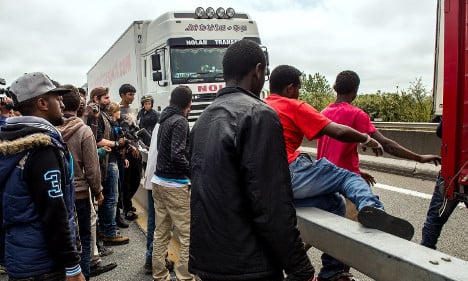 Migrants prepare to try and board a truck near Calais in northern France. Photo: AFP

Tens of thousands of Britons including tourists and truckers are expected to head to France in the coming weeks for their summer holidays.

A great many will arrive and return through the port of Calais, where the ongoing migrant crisis appears to be spiraling out of control and tensions are heightening.

This week there were renewed flare ups between migrants and police on the approach roads to the port that left one officer injured.

Migrants are resorting to ever desperate and more dangerous methods to get aboard trucks with reports that they were hurling stones and bags onto roads in order to slow the traffic and give them a better chance of clambering on board a truck. (Police try to control the movements of the migrants in Calais. Photo: AFP)

This week also saw a shocking video go viral showing migrants swarming around trucks in front of stunned tourists on a coach.Various police sources told AFP that trouble is set to “boil over”.

With Calais the main port for British tourists and truckers authorities in the UK are growing increasingly concerned.

“Having to run the gauntlet on the roads through Calais is not exactly a great way to start or end a holiday in France,” Paul Watters from the UK’s Automobile Association (AA) told The Local.

“These are desperate people and they are taking desperate measures.”

The AA’s head of roads and transport policy said mobile homes and caravans were the most vulnerable and that stopping in motorway rest areas on the road up to Calais was not advised.

“We are advising drivers with caravans and mobile homes to take precautions are make sure their doors and windows are locked,” he said. “Filling up on petrol in advance is a good idea and give yourself plenty of time to get to the port.

Watters said that drivers could think about using a different port if they had time.

“Awareness is the big thing. People on holiday are relaxed and they sometimes forget this kind of stuff.”

“We don’t want to discourage people from going. Most journeys to France are trouble free. At the moment the migrants are seen as hazards rather than threatening,” one warning reads.

French police have increased their patrols around Calais and the roads leading up to the port, but they are struggling to cope with the sheer number of migrants.

There are now believed to be around 3,000 amassed in camps in and around the city, many living in squalid conditions.

Most intend on getting to the UK one way or another and after having fled war-torn countries they say they have little to lose. (Migrants look to find a way into a truck in Calais. Photo: AFP)

But those caught up in the migrants' ever-daring and desperate attempts to get to the UK are still far more likely to be truckers than tourists.

There were reports in the British press in recent days of truck drivers being threatened at knife point if they didn’t open their trailers.

“We must improve the security of the port and the approach to the port,” Peter Cullum from the Road Haulage Association told The Local.

“And we must keep the trucks moving. If they end up stationary then we need more police in place,” he said.

The association met with representatives of the UK government this week to discuss measures to ease the crisis, but concerns are growing about the increase in the number of criminal trafficking gangs getting involved.

“We don’t encourage drivers to look in their trailers or approach the migrants. It’s just too dangerous. They just need to drive them somewhere safe and alert authorities.”

Eurotunnel which operates the shuttle service across the Channel says it has stepped up checks on trucks and is making more space available to them inside the terminal, so they don’t have to wait on the approach roads.

The crisis in Calais has also caused tension between British authorities and their counterparts in France, with Calais mayor Natacha Bouchart threatening to blockade the port unless Britain stumped up more cash to help pay for the problem.

Speaking to The Local this week Britain's ambassador to France Sir Peter Ricketts insisted that it was responsibility of France to provide adequate security at Calais.

“Our top responsibility here as the British rep in France is to ensure the safety of British travellers and British lorry drivers using Calais,” he said.

“Its a French responsibility to ensure security in Calais. Its not a problem that has an easy solution, but that reflects the problem these people won't accept the French offers and they are not entitled to come to the UK.

“At the end of the day these people have to decide that if they are not going to get to the UK, it's much more in their interests to take up asylum in France or go back to their countries of origin. Whatever they choose.

“We are trying to pass the message as best we can to say that Britain is not an El Dorado.”