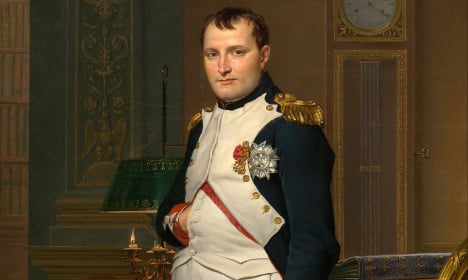 The Emperor Napoleon in his study at the Tuileries, by Jacques-Louis David. Photo: Wikicommons

The French general was often depicted as much smaller than average height by British caricaturists – and this image persists.

According to historians, however, the so-called “little corporal” actually stood at 5 ft 6 (1.68 m), which was the average height for a man in that period. Nevertheless, he was reportedly “small” in other areas. Britain’s BBC4 recently revealed in a documentary that his penis measured just 1.5 inches (3.8 centimetres).

Napoleon was born in Ajaccio, on the island of Corsica, to the Buonaparte family, who were of noble Italian-Corsican ancestry. His father, Carlo Buonaparte was Corsica’s representative to the court of Louis XVI of France. Napoleon was, in fact, christened Napoleone di Buonaparte – but in his twenties he changed his name to the more French Napoléon Bonaparte. Famously, Napoleon was deeply in love with his first wife, Josephine, a widow six years his senior to whom he wrote a series of explicit love letters. When the general discovered that she’d had several affairs, he was furious and went on to have several mistresses including Pauline Fourès, described as “Napoleon’s Cleopatra”.

The Bonapartes eventually divorced when it became clear that Josephine was unable to produce an heir – and Napoleon went on to marry Austrian archduchess Marie Louise. …but not as much as he loved war.

Much as he loved women, his lust for world domination was stronger. In 1804, Napoleon was quoted as saying: “Power is my mistress. I have worked too hard at her conquest to allow anyone to take her away from me.”

Bonaparte at the Siege of Toulon. Photo: Wikicommons

He tried to escape to the US after Waterloo.

After his crushing defeat at Waterloo by British-Prussian forces, the French emperor apparently considered emigrating to the United States. He went so far as to request two warships to take him and his staff across the Atlantic and even began packing up his possessions. But his plans were thwarted by the British navy, who refused to let him sail.

…but ended up on a remote island instead.

Napoleon was instead taken to the British-ruled isle of Saint Helena, off the African coast. There he spent his final days and finally died on May 5th, 1821, at the age of 51. The answer to this is: probably not. Officially, Napoleon is thought to have died of stomach cancer, the same disease that probably killed his sister Pauline and his father.

But some experts have argued that he was slowly poisoned with arsenic by opponents who feared the ex-emperor might escape and return to power. This theory is backed up by the fact that 20th-century tests on Napoleon’s hair have found traces of arsenic. Napoleon on his death bed, by Horace Vernet, 1826. Photo: Wikicommons

Did France lose Waterloo because of Napoleon’s haemorrhoids?

On the morning of the Battle of Waterloo, Napoleon was said to be suffering from acute haemorrhoids, which prevented him from keeping a close eye on things on the battlefield. His opponent, the Duke of Wellington, later described the battle as “the closest-run thing you ever saw your life.” Was it haemorrhoids that made all the difference?

It’s illegal to name a pig Napoleon in France.

Yes, indeed – there is a French law that forbids people from naming their pigs Napoleon. It’s not clear whether this law still applies – but, to be on the safe side, why not call your pig Wellington instead? Everyone still wants a piece of him.

You’d think that Napoleon’s comprehensive defeat – not to mention the haemorrhoids – would put people off. Yet artefacts that are said to have belonged to the former emperor continue to sell for hundreds of thousands of euros.

Last November, a South Korean chicken mogul bought one of Napoleon’s two-pointed hats for a whopping $2.2 million. “I have always held in high esteem Napoleon’s challenging spirit that nothing is impossible, so I made the purchase of his hat to reawaken entrepreneurial spirit,” the buyer Kim Hong-Kuk, was quoted as saying. And, in September, Napoleon and Josephine’s marriage certificate sold for €437,500.