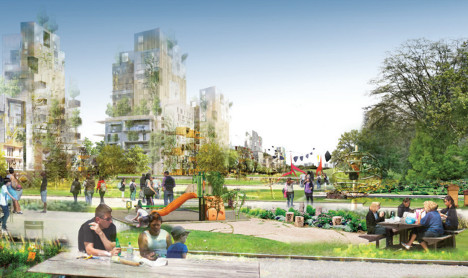 The proposed plan for the "Central Park of Grand Paris". Photo: castro-denissof.com
Around six kilometres, or four miles, from the northern end of Paris's périphérique (ring road) lies the Parc Georges Valbon, which at 415 hectares (over 1,000 acres) is the third biggest green space in Greater Paris behind the Bois de Boulogne and the Bois de Vincennes.
It's in this park, which is also known as the Parc de la Courneuve, that architect Roland Castro plans to redevelop 70 hectares into a new living area for 24,000 people, complete with shops and cinemas. (Photo: castro-denissof.com)
The plan has been named “Le Central Park du Grand Paris” as the project's urbanization of the park's fringes is immediately comparable to New York's most famous green space.
Architect Castro told Le Monde newspaper that the area would be similar to Parc Monceau, a picturesque wooded park in the 8th arrondissement of Paris.
“It'll be like a Parc Monceau – but 40 times bigger,” he said. (The Parc Monceau in western Paris. Photo: Steve Shupe/Flickr)
“The plan is to get Parisians to want to cross the périphérique. Why should having a park in the city be reserved for the bourgouis people of the 8th arrondissenment?”
Local residents aren't impressed, however, with a petition against the plans gaining 10,000 signatures, Le Figaro newspaper reports.
The paper noted that the move would be akin to amputating the “green lung” of the Seine-Saint-Denis département.
Leading the charge against redevelopment is environmentalist Etienne Penissat, who says Prime Minister Manuel Valls needs to reverse his April decision that give the project the green light. (The proposed park redesign by night. Photo: castro-denissof.com)
“The government has to put an end to this project, it'll be an environmental disaster if it goes ahead,” Penissat said.
Indeed, parts of the park are Natura 2000 areas, meaning it's a threatened habitat in need of protection. Opponents have pointed out that protected species also live in the area. (Photo: castro-denissof.com)
The redevelopment plans are part of a much larger initiative – Grand Paris – which was launched by former French President Nicolas Sarkozy in 2007 in an attempt to develop Paris and its nearest suburbs into one metropolis. The creation of this area is scheduled to begin on January 1st next year.
“Who hasn't dreamed of living in 'a town in the countyside', in a mix of nature and urban life?” – ask the architects. Have a look at more pictures from their plans for the park here. (The park is north of Paris and covers 415 hectares of land. Photo: GoogleMaps)