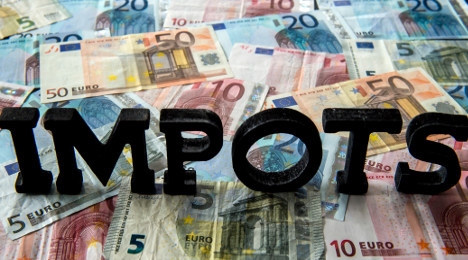 The French won't pay any income tax for 2017, but it's not as great as it sounds. Photo: AFP
On paper it sounds fantastic – no income tax for a whole year. Especially in France where the tax man's appetite is notorious.
Budget Minister Christian Eckert confirmed on Wednesday that France's reshuffle of its taxing system would come into effect in January 2018, when the French would begin automatically paying income tax (impôts sur le revenue) at source rather than in the annual tax returns.
The move means France will soon handle income taxes similarly to most other developed nations, and that the French will no longer pay taxes the following year after the annual declaration.
That means no need to save up money throughout the year to ensure coverage for September's tax bill.
To ease the changeover Eckert announced on Wednesday that 2017 would be “white year” (année blanche) or a “lost year” as far as income taxes were concerned.
But unfortunately for tax payers it's not as fantastic as it all sounds.
The current system will remain in place in 2016, when the French will pay for 2015 taxes, and in 2017, when the taxes for 2016 will be paid, but a switch will take place on the 1st of January 2018, when taxes will begin to be paid at source immediately.
READ ALSO: Should France change its income tax system? While this might sound like a welcome relief for the wallet of the average French person, a closer look suggests that there's a lot more at play.
French economist Eric Heyer, from the French Economic Observatory, told The Local that most tax payers won't notice the change and many may actually end up paying more income tax.
“It's false to see this as a present for the worker. By the time January 2018 comes around, salaries will normally have gone up so in effect workers will pay more in taxes,” said Heyer.
He explained the only thing that might happen is that companies might agree to pay out any bonuses and other forms of “variable income” in 2017, so that they are not taxed in 2018.
As soon as Eckert announced that 2017 would be an “année blanche”, the government came in for strong criticism.
Leader of the centrist MoDem party François Bayrou, who supports taxes paid at source, was among the first to call out the government.
Calling it “a joke” and a deception, he told the iTele channel that the move would “only really impact a small number of people”.
“The government wants to make it look like it's passing off a gift,” he said, adding that the state needed the money for itself.
“France is the European country where the deficit is consistently the highest, the debt is increasing, and where the situation is critical,” he added.
But economist Eric Heyer said it's a “false argument” to suggest the state will lose millions of euros in revenue.
“The change will not lower tax receipts for the government,” he said, adding that the “année blanche” was just “mechanical”.
“On the contrary receipts should go up because salaries will go up.
President Francois Hollande, who promised to make the change as part of his 2012 election manifesto, and government spokesperson Stephane Le Foll have packaged the plan as something that would simplify the lives of tax payers and business owners.
However due to the fact that taxes in France are paid per household and depend on factors such as number of children and marriage, rather than being based on individual income, the annual declarations will not disappear even with the change.
While income tax in France is generally worth around one month's wage, workers also pay other “social charges” (charges sociales/cotisations sociales) directly out of their salaries.
These charges, that pay for the country's welfare state, are worth around 18 percent of gross earnings.