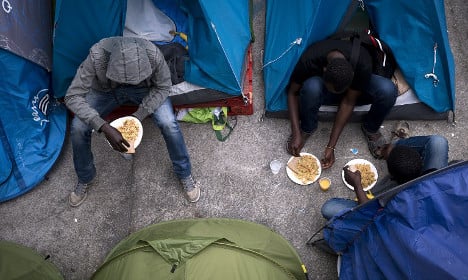 Migrants eat a meal in a campsite in central Paris. Photo: AFP
France unveiled plans on Wednesday to add 10,500 additional housing spots for migrants as European nations grapple with how to handle a wave of immigrants crossing the Mediterranean.
The government plans 5,000 housing units for people granted asylum in France, 4,000 for asylum seekers and 1,500 emergency slots for illegal immigrants.
France's Interior Minister Bernard Cazeneuve said the government aimed to create “additional housing spots for those thrown into exile by persecution, abuse, imprisonment and execution.”
“France is doing its part,” he insisted, amid a spat with neighbouring Italy, which has urged its fellow EU countries to do more to ease the burden. In seven years, the number of asylum seekers has nearly doubled in France to reach more than 66,000 cases in 2013.
As a result, there is a severe lack of housing facilities and half of all asylum seekers have to fend for themselves, resorting to living in slums, squats or sleeping rough.
Processing these asylum requests takes an average of two years, and legislation proposed in July aimed to shorten the wait to nine months by 2017, giving authorities dealing with the cases more funding and staff.
The managing director of France Terre d'Asile, a group representing asylum seekers, greeted the news cautiously.
“It is a sweeping plan of a type that has never been put into place until now,” said Pierre Henry. He added the increase in housing would require close vigilance as the plan will involve a variety of players from around the country.
The announcement comes as Italy has been increasingly applying pressure to other European Union nations to take in their share of the waves of migrants arriving on its shores.
But at a meeting Tuesday in Luxembourg, European interior ministers failed to reach an agreement on carrying out proposals by the European Commission for quotas to redistribute migrants throughout the bloc.
European leaders swore action after an estimated 800 migrants died in a shipwreck in April, the worst disaster yet in the Mediterranean in a year in which a total of 1,800 people have died trying to reach Europe.
More than 100,000 migrants have arrived in Europe this year, 60,000 through Italy alone, according to the EU's border agency Frontex.
Migrants in France have been a contentious issue lately. Shortly after the EU suggested France take in 9,000 migrants over the next two years, French authorities demanded the EU revise its figures, claiming there is an imbalance that needs to be addressed.

Two separate migrant camps have been closed down by police in recent weeks, both prompting protests from the French public.