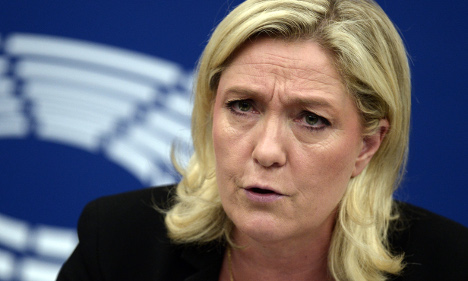 National Front leader Marine Le Pen. Photo: AFP
The group will be officially introduced at a press conference in Brussels on Tuesday by Le Pen, who succeeded her father Jean-Marie Le Pen as head of the National Front (FN) in 2011.
The new EU parliamentary group will include European deputies from the Dutch Freedom Party (PVV), the Freedom Party of Austria (FPO), Italy's Northern League and Flemish nationalist group Vlaams Belang.
Members of the European Parliament from other countries will also be joining the new political grouping, the FN statement added, without giving details.
PVV leader Geert Wilders confirmed the group's formation in a jubilant tweet.
“The formation of a group in the European Parliament has succeeded! Great news and an historic moment,” he wrote, posting a photograph of himself and Le Pen clinking champagne glasses, their faces wreathed in smiles.
For a political group to be officially recognised in the European Parliament it must include at least 25 MEPs from at least seven EU nations.
Such a group can enjoy not only more visibility and possible committee presidencies but also millions of euros in funding.
The FN, which topped the vote in France in May 2014 European elections, has been attempting to form a parliamentary group ever since but had struggled to meet the seven-country representation requirement.
FN sources late Monday said that last-minute negotiations were still underway but refused to say which other countries could be involved.
The European parliament already has one europhobic and anti-immigration group; the Europe of Freedom and Democracy Group is led by Britain's UK Independence Party and its leader Nigel Farage.