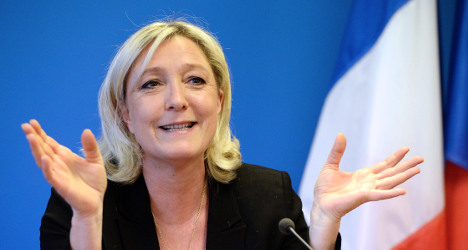 Marine Le Pen has formed a new eurosceptic group in the French parliament.

Le Pen could until now count on 37 like-minded MEPs elected to the European Parliament in 2014, well above the 25 minimum, but they came from only five of the EU's 28 member states, short of the seven required to win recognition and EU financing.

Le Pen said British MEP Janice Atkinson, who was expelled earlier this year by Ukip, had agreed to join, along with Michal Marusik and Stanislaw Zoltek, who had cut their ties to the extreme-right Polish KNP led by Janusz Korwin-Mikke.

“It is the culmination of a year's work,” Marine Le Pen said at the formal launch of the new group, “Europe of Nations and Freedoms,” in Brussels, where she welcomed the three new members that give her seven-country representation.

“We are going to fight the European Commission and its turpitudes,” she said, also attacking European Parliament president Martin Schulz for belittling her MEPs over the past year.

She said Schulz's attitude had emboldened her to form the new group, which was set “to fight with all our force for the defence of our peoples”.

Locked in a bitter feud with her father and National Front founder Jean-Marie Le Pen, she said that he had no wish to be part of the new group in Parliament which has the National Front's 21 MEPs as its core.

“It's an historic day, we are united, seven countries against the European Commission,” Atkinson said, explaining that the absence of Jean-Marie Le Pen had allowed her to join.

Britain's eurosceptic, anti-immigration UK Independence Party (Ukip) expelled Atkinson in March for “bringing the party into disrepute” over payment of a restaurant bill as EU expenses.

Ukip leader Nigel Farage, also an MEP but in his own Parliamentary grouping, described the incident at the time as “one of the most incredibly stupid and dishonest things I've ever seen in my life.”

The FN topped the vote in France in May 2014 European Parliament elections and has been trying to form an official grouping ever since.