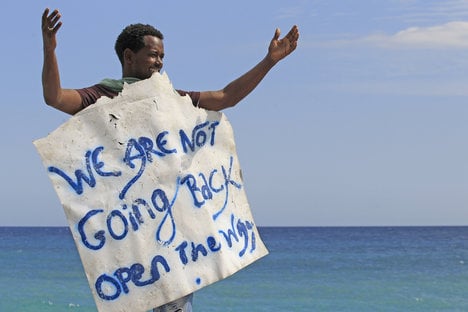 A migrant holds a placcard in Ventimiglia. Photo: Jean-Christophe Magnenet

Italian Interior Minister Angelino Alfano described images of migrants perched on rocks at the border town of Ventimiglia after being refused entry to France as a “punch in the face for Europe.”

His French counterpart Bernard Cazeneuve hit back by insisting that France was fully within its rights to send illegal immigrants or asylum seekers back to Italy.

The clash sets the scene for some tough exchanges when the two men and other European Union ministers meet Tuesday in Luxembourg for talks on the crisis.

Around 250 migrants — most of them English-speaking Africans according to AFP reporters in Ventimiglia — have been camped there for four days, protesting that they should be allowed to enter France on their way to their desired destinations in northern Europe.

“We will stay here tomorrow, the day after and even several months if it is necessary,” said one of the Africans, 20-year-old Brahim from Darfur in Sudan. “All we are asking is to be allowed to pass through France to get to other countries.”

Alfano said the border scenes were proof that the migrants had no desire to stay in Italy. “They want to go to other parts of Europe and they consider our country as a transit country.”

Cazeneuve dismissed that argument as irrelevant, citing the Dublin accords under which new arrivals in the European Union are supposed to be processed by the country in which they first land.

“The Dublin rules must be respected,” the French minister said. “When migrants arrive in France that have been through Italy and registered there, European law applies and that means they must be returned to Italy,” he told BFMTV.

Cazeneuve confirmed that French authorities had been turning back a growing number of migrants this year in a bid to prevent people with no claim to asylum entering the country, saying it was necessary to ensure legitimate refugees could be accommodated.

But he denied that Paris had effectively closed its border in breach of the spirit of the Schengen accords which provide for passport-free travel around much of continental Europe.

Italy says the Dublin rules on processing migrants are no longer appropriate given the scale of the problem. More than 220,000 people have landed at its southern ports since the start of 2014 and there is mounting anger over what Rome sees as its EU partners closing their eyes to the consequences of the migratory flows.

The spike in the numbers of people being sent back to Italy in the last two weeks has increased the pressure on the country's reception facilities and led to a very visible build-up of migrants sleeping rough in and around major train stations: a development that has been pounced on by far-right politicians.

Prime Minister Matteo Renzi threatened on Sunday to implement a “Plan B” to deal with the migrant crisis that would “hurt” Europe. Renzi did not specify what options he was considering but Italian media on Monday reported that Rome could start issuing newly arrived migrants with temporary visas giving them the right to travel throughout the Schengen zone.

Such a move would be politically explosive as it would seriously undermine both the Dublin and Schengen accords.

Alfano has said he will be asking his EU counterparts on Tuesday to agree a fairer distribution of migrants throughout the bloc and discuss the possibility of creating processing camps in Libya, from where most of the migrants arriving in Italy by sea set off.

Several countries have come out against any share-out of migrants and operations in Libya would be fraught with practical difficulties given the conflict and chaos engulfing the north African country.

Italy also wants the EU to forge repatriation agreements with African countries and finance flights home for the estimated two-thirds of migrants who have no claim to asylum under international law.