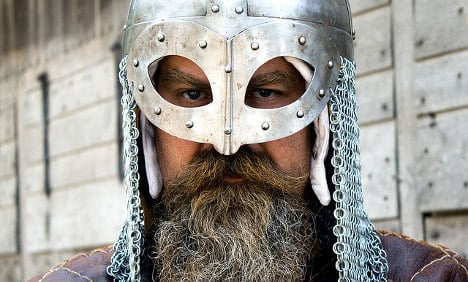 Do YOU have Viking blood? Photo: Hans Splinter
Around a hundred volunteers from the Cotentin Peninsula area are giving DNA samples to academics at the University of Leicester, who are trying to find descendants of the Vikings who invaded what is now Normandy in the 9th century.
The aim is to learn more about “the intensity of the Scandinavian colonisation” in the 9th and 10th centuries in the Cotentin Peninsula, said Richard Jones, a senior history lecturer at the University of Leicester.
That includes trying to find out whether the colonisers kept to themselves or married amongst the locals, he added.
The French volunteers have been chosen because they have surnames that are of Scandinavian origin or that have been present in France since at least the 11th century. They also qualify if all four of their grandparents lived within
a 50-kilometre (30-mile) radius of their current home.
French data protection authorities gave their green light to the study, which will be published in 2016, but the DNA testing has raised eyebrows in some quarters.
“We're worried this will build on the idea that there are real Normans and fake Normans,” said Jacques Declosmenil, head of the local wing of the Movement Against Racism (MRAP) group.
“In the current context of xenophobia, it's very dangerous. Racists could use this to say: 'I've got proof that I haven't got any Arab blood,' for instance.”
But Jones dismissed such concerns, saying the scientists were only studying two percent of a person's DNA in order to potentially establish Scandinavian ancestry dating back more than 10 centuries. “Anything is possible” for the other 98 percent, he added.
The team are searching for Viking roots amongst residents in three areas of Britain as well as in Normandy.
But at the nearby Caen University, medieval history professor Pierre Bauduin said he had warned the Leicester academics that racial origins are “an extremely sensitive topic in France”.
“It's important that the results of this are not misrepresented by anyone,” he said.