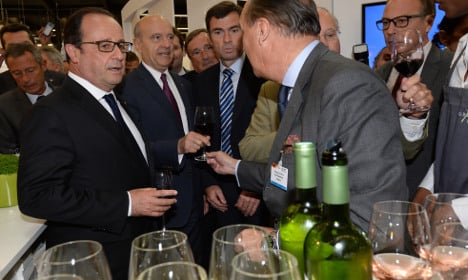 French president François Hollande tastes a tipple at the start of Vinexpo in Bordeaux. Photo: AFP

The winners were picked from almost 16,000 bottles after lengthy blind tastings in London by more than 200 masters of wine and master sommeliers.

“It is not enough for a wine to be excellent, it has to be the best of its kind,” taking in the grape, soil, price and region, said Steven Spurrier, chairman of the Decanter World Wine Awards.

While France, the world's leading wine producer, took home the most trophies with eight, Decanter highlighted the fact that a Spanish wine by Miguel Torres won the award for high-end Red Bordeaux, with a blend of Cabernet Sauvignon, Cabernet Franc and Merlot grapes.

The “victory in a Bordeaux category is a further example of Spain's growing reputation for quality,” Decanter said.

Spain won five trophies, followed in Europe by three for Italy and one each for Portugal and Slovenia.

Slovenia won its prize for a sweet wine sold at over 20 euros, while another surprise was UK retailer Marks & Spencer who scored global best for a Chardonnay under 20 euros under its own label.

More and more good wine was being produced in unexpected places, said Spurrier at a news conference, where a new red wine from Turkey was singled out for praise along with Swiss wines made of little-known grapes.

A much-lauded Moroccan wine was produced from an older vineyard, but showed that the country's wines “are now more elegant”, Spurrier added.