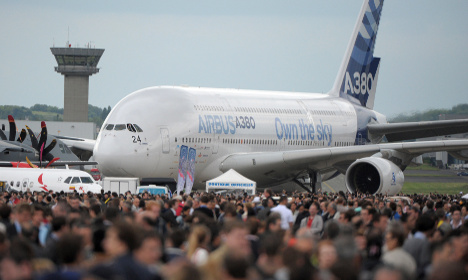 President Francois Hollande is set to inaugurate the week-long Paris Air Show, which is expected to draw 315,000 visitors and 2,260 exhibitors from 47 countries.

European company Airbus has a number of new products to show off, including its prototype all-electric plane, the E-Fan, and a cleaner, quieter civilian helicopter, the H160.

They reflect the increasing focus on green innovations that are set to be a theme at this year's show ahead of the global climate conference being hosted in the same venue later this year and with the air industry committed to being carbon-neutral by 2020.

Rising fuel prices are a big motivator. Boeing's promise that its next mid-range carrier, the 737 MAX, will offer 20-percent fuel savings means it has already garnered more than 2,700 orders, even though it will not be unveiled until next year.

The Airbus A320neo, with a 15 percent cut in fuel consumption, has already racked up a record 3,800 pre-orders before the first one has even left the production line.

Top industry officials, government ministers and environmental experts will meet on Thursday to discuss air travel's impact on the climate, and there will be a week-long exhibition on the subject called “The Sky of Tomorrow”.

Meanwhile, insiders have their eyes firmly on the bottom line as the big manufacturers compete for who can fill up their sales book fastest.

Airbus pipped its US rival at the last Paris Air Show two years ago, landing sales worth a total of $39.3 billion compared to Boeing's $38 billion.

That year's show saw the aeronautic industry land a total of $115 billion of orders.

US-based Boeing said Friday it expected to sell 38,050 civilian aircraft over the next 20 years, worth $5.6 trillion, and Airbus is due to announce its own projections this week.

“I don't know if it will be the record year, but it will be a good show,” said Airbus boss Fabrice Bregier, looking forward to “several hundred” orders for his company.

Boeing's Randy Tinseth said the Seattle-based company had “a lot of things in the pipeline on the mid and long-haul planes.”

The industry needs between 300 and 400 sales next week to keep its production lines ticking over through 2020, said Ben Moores, a senior analyst at IHS Aerospace, Defence and Security.

But the defence sector is struggling, with Deloitte saying the decline was led by the United States, which has shed 168,000 defence jobs since 2010.

Paris is a particularly important venue for smaller companies that have fewer chances to show off their wares.

Canada's Bombardier is particularly hungry for sales after its C Series aircraft struggled through development delays and difficult market conditions, said Moores, while Pakistan is desperate to secure its first-ever order for its JF-17 Thunder fighter aircraft.

The show at the Paris-Le Bourget airport north of Paris opens its doors to the public from Friday, when they will get the chance to see some 40 aircraft in flying displays each day, including fighter jets such as the JF-17, France's Rafale and Ukraine's Antonov 178.

Airbus has also confirmed it will display its A400M military transport plane for the first time since a fatal crash in Spain last month caused by a massive engine failure.