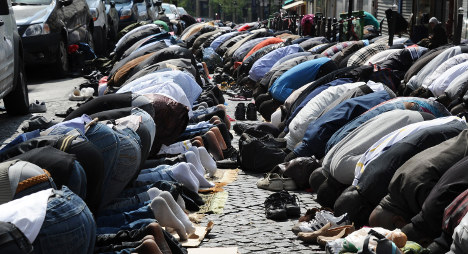 Muslims pray in a street in Paris in 2011 due to to a lack of capacity in the city's mosques. Photo: AFP

The question of the role of Islam in France is up for discussion on Monday as the French Prime Minister Manuel Valls and members of his government held a conference with around 150 Muslim leaders.

The Muslim representatives, including imams and theologians, reportedly chosen because of their loyalty to the Republic, will meet the PM to discuss the concerns of their community.

Chief among them is the longstanding issue of the lack of places in France for Muslims to worship. In France there are currently 2,500 mosques with another 300 under construction but Dalil Boubakeur, Rector of the Grand Mosque in Paris, says the number falls far short of what is needed.

With upwards of five million Muslims in France – the largest population in Europe – Boubakeur and other imams suggest as many as 5,000 mosques are needed.

At risk of causing a stir on the very day the government wants to build ties on the ever-sensitive subject of Islam in France, Boubakeur says the answer lies in the France’s declining Catholic population.

He told Europe 1 radio that the country's empty churches could make ideal locations for mosques.

“It’s a delicate issue, but why not?” Boubakeur told Europe1 radio. France is home to around 40,000 churches for a population of around four million practicing Catholics. The idea of transforming former churches into mosques has been brought up in the past.

Last year far-right National Front councillors raised eyebrows when they suggested that's exactly what should happen to a former church in the northern town of Roubaix.

Calls for more mosques have been supported by France's Christian leaders as a “legitimate” demand.

“Muslims should, like Christians and Jews, be able to practise their religion,” Monseigneur Ribadeau-Dumas, spokesperson for the Bishops’ Conference of France, told French radio station Europe 1.

French PM Manuel Valls opened the talks on Monday insisting that the emphasis will be on building up close relations and that it was not the role of the secular government to get involved in religion.

“We must be very clear: the state does not take care of theology. There will be no laws, there will be no decrees, and no circulars to say what Islam should be.”

Valls also said that hate speech and anti-Semitism “were not Islam”.

Monday’s talks are aimed at giving new life to a group that represents the Muslim community with the CFCM (French Council of the Muslim Faith), headed by Boubakeur, which is essentially deemed not up to the job.

The French government recognised it needed to open dialogue with the country’s Muslim community leaders in the wake of the Paris terror attacks, which were perpetrated by homegrown Muslim extremists.

Another sensitive subject on the agenda is the question of security around Muslim places of worship.

The number of Islamophobic attacks has soared in France since the terror attacks with Muslim groups recording a six-fold increase since January.

The acts include violence against men and women, some of whom were pregnant, vandalism and destruction of Muslim places of worship or businesses and “Nazi” graffiti on mosques.

Also on the table will be the French government’s plan to teach 2,000 imams and chaplains about French secularism, known as laicité, but the difficulty is that not many of them speak French.

The government will also discuss issues like halal meat and Muslim rituals.

But one sensitive subject that will not be discussed is the growing issue of young Muslims being radicalised. The government says it does not want to stigmatize the religion.