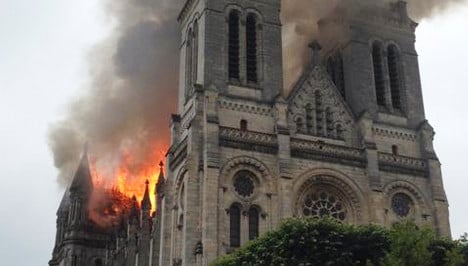 The Saint Donatien basilica in Nantes was on fire late on Monday morning. Photo: littlenantaise/Twitter
The Saint Donatien basilica in Nantes, western France, went up in flames on Monday morning.
Details remain unclear at present for how the fire started, but authorities have confirmed that it began at 10.30am. Over 40 firefighters were dispatched to the scene, which is in a residential area.
By midday, the fire was under control but not completely extinguished, reported French newspaper 20 Minutes.

Didier Beauland, a pharmacist who has a shop near the basilica told The Local that those in the area saying workmen had been carrying out work in the roof of the church.

Fire chiefs later said that the blaze was “probably linked to waterproofing work that was taking place on the roof”.

“Firefighters arrived quickly but they had trouble getting to the basilica because the road was blocked as a crane was being dismantled,” said Beauland. “But eventually they got through.”

“As soon as it started the fire spread rapidly through the roof. It all happened so quickly,” he said.

“It’s very sad. Not good at all. It's a historic church. This is a Christian neighbourhood and who knows how long it will remain closed for now.”

Social media users began to share pictures of the fire soon after it broke out, revealing huge flames leaping from the roof and thick smoke plumes billowing into the air.
One tweeter estimated that around 80 percent of the roof had been damaged by the time emergency crews distinguished the blaze.
The back part of the basilica has been seriously damaged and some of the wooden beams have given way, authorities said.
A 79-year-old man by the name of Dominique who lives by the building told 20 Minutes that the scene was “heartbreaking”.
“I was baptized here, it's one of the most important monuments in Nantes,” he said.

The church was constructed between 1872 and 1889, and is one of two in the city of Nantes.