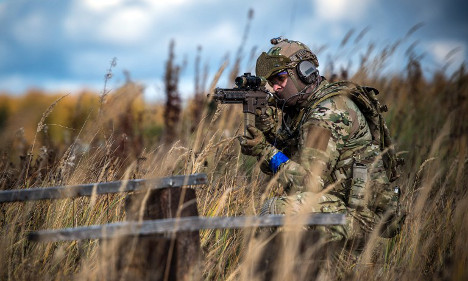 An Airsoft enthusiast in action. Photo: AFP
Three boys aged between 14 and 16 died on Saturday and a fourth left in a serious condition in hospital when a smoke bomb they had made blew up.
They had been in an abandoned cabin in Bas-en-Basset in the south central département of Haute-Loire.
Radio channel France Info reported that a series of dangerous chemicals were found in the area, together with debris, and a replica firearm that is typical for those playing the game of Airsoft.
Airsoft, which was invented in Japan, sees two teams fighting with replica firearms that shoot plastic pellets. The battles take place in fields or indoors, with both teams wearing full military gear. Players sometimes are known to use smoke bombs too.
It is considered a more competitive version of the game paintball, where the weapons used can do more damage and participants take it more seriously. (A photo shows airsoft pistols in a gun shop in Paris. Photo: AFP)
Several French media outlets concluded on Monday that the smoke bomb that had detonated in southern France had been intended to be used during an Airsoft battle.
Vice-prosecutor of Puy-en-Velay, Yves Dubuy, took aim at the “sport” itself soon after the news broke, calling it “an imbecilic game pushed by irresponsible people”.
A spokesperson for France's national Airsoft association told French newspaper Le Figaro that players were not encouraged to make their own weapons, and should rent them from licenced facilities instead.
Airsoft has gained popularity in France, with about 25,000 people estimated to be players and around 2,000 licensed locations.
Fans and players of Airsoft have staunchly defended the game and say French authorities should not make it a scapegoat for the deaths of the youths.
“You can not blame the French airsoft community for the actions of one group of teenagers literally playing with an unstable combination of chemicals in an area where they shouldn't have been playing,” Mark Oliver Stewart told The Local.
Konrad Kopacz said: “They didn't die because of an airsoft gun or professionally produced pyro, or because of the game of airsoft itself.”
“The question is, how they managed to produce something like that without any supervision and why and/or how it was brought to the gaming field.
“Airsoft is an extreme sport and therefore it should be treated like one. Don't play it if you don't take extreme safety measures,” he said.