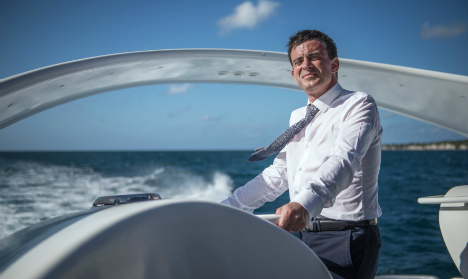 The popular prime minister has sought to end the controversy by pledging to refund part of the cost of last weekend's junket, despite insisting he was on official business.

“This is a lesson,” Valls told the Journal du Dimanche newspaper.

“It was a mistake, a blunder. I gave the impression to the French people that I had not devoted myself to them. I am sorry.”

Born in Barcelona and an FC Barcelona fan, Valls said he was at the match — which his team won 3-1 against Juventus — to talk with UEFA chief Michel Platini about the Euro 2016 championships to be held in France.

But the trip has gone down badly in a country struggling through an economic crisis with more than 10 percent unemployment.

An opinion poll showed that more than three out of four French people were “shocked” by the trip, which cost up to €15,000 ($16,900) according to government sources.

Valls said that taking his children on the flight “did not cost a single euro more”, but has since pledged to repay €2,500 to offset the cost of his sons' travel.

French President Francois Hollande rowed in to support his prime minister Sunday, telling the regional daily Sud-Ouest he had his full confidence.

“Manuel Valls has a particularly difficult job… which he does with energy and efficiency. He is a good prime minister and does not spare himself as head of the government. He has my full confidence.

“This controversy is now closed. He has said all that needs to be said,” Hollande added.