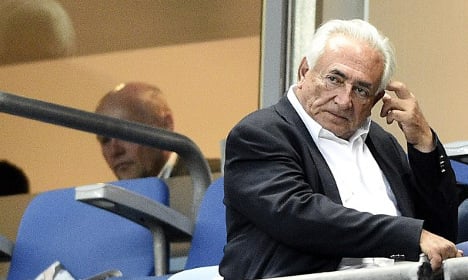 DSK has been cleared of all pimping charges. Photo: AFP

Ex-IMF chief Dominique Strauss-Kahn avoided conviction on Friday after a court in Lille cleared him of “aggravated pimping” in a trial over sordid sex parties.

The court's verdict drew a line under the latest in a series of legal woes over his sexual escapades.

The 66-year-old merely nodded his head in acknowledgement of the verdict which found him not guilty of procuring prostitutes to take part in sex parties in Paris, Brussels and Washington.

He was heard saying “All that for this” when he left the court.

The economist saw his high-flying career at the head of the International Monetary Fund — and his French presidential prospects — implode when a New York hotel maid accused him of sexual assault in 2011.

He was charged with “aggravated pimping” for allegedly aiding and abetting the prostitution of seven women — a charge punishable by up to 10 years in prison.

However, even the prosecutor called for him to be acquitted, saying that “neither the judicial enquiry nor the hearing have established that Mr Strauss-Kahn is guilty”. At his trial in February, Strauss-Kahn calmly fended off the accusations, saying that while he was a libertine who enjoyed group sex, he was unaware any of the women attending the soirees had been paid to be there.

However, he lost his temper as lawyers pushed the former prostitutes to recount brutal scenes in which he sodomised them, allegedly without their permission, saying he was not on trial for “deviant practices”.

“I must have a sexuality which, compared to average men, is more rough. Women have the right not to like that whether they are prostitutes or not,” he said.

He said the use of prostitutes “horrified” him and that paying for sex would be too great a risk for a man at the head of the IMF, which was busy “saving the world” from the financial crisis that began in 2008.

In their closing arguments, his lawyers said the case against him had “collapsed” into nothing more than an indictment of Strauss-Kahn's morals, and the prosecution appeared to agree.

Main prosecutor Frederic Fevre called for Strauss-Kahn to be acquitted, saying that “neither the judicial enquiry nor the hearing have established that Mr Strauss-Kahn is guilty”.

Strauss-Kahn found himself in the dock alongside a colourful cast of 13 characters including a senior police officer and brothel owner Dominique Alderweireld, known as “Dodo the Pimp”.

A judge ruled that the testimony against Alderweireld was too vague.

Alderweireld was the only one of the 14 accused in the “aggravated pimping” trial in the northern French city of Lille for whom the prosecutor had requested a prison sentence.

One by one the accused were acquitted on Friday of charges they had trafficking prostitutes and pimped them out to a network of local businessmen and police officials in an upmarket Lille hotel called the Carlton.