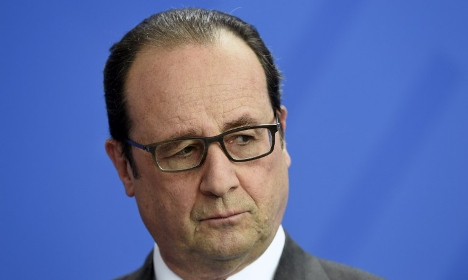 François Hollande has launched an appeal for a deal to be sealed on action to fight climate change. Photo: AFP

French President Francois Hollande on Thursday made a passionate call for action to seal a world climate pact in Paris at the end of the year.

Hollande's plea in Geneva came as a UN conference in Bonn wound up with little headway to try and get a carbon-curbing agreement in place for the Paris conference in November.

“I am here to launch an appeal,” the French leader told an International Labour Organization summit in Geneva on climate change and its implications for labour, businesses and communities.

“We need the full engagement of our social partners,” he said.

“It's in the interest of the planet, of companies, of economic development and of social progress.”

The Paris accord is meant to save future generations from disastrous climate change by limiting global warming to two degrees Celsius (3.6 degrees Fahrenheit) over pre-Industrial Revolution levels.

“Fighting climate change does not in any way impact on jobs,” said Hollande, adding that fears expressed by both developing and developed countries were groundless and actually such action would create more
employment.

“It is because we are creating new rules on behaviour, production, transport and consumption… that we will create more activity, investment and have higher growth,” he said.

He said 60 million new jobs could be created in the next two decades due to “green growth”.

PARTNER CONTENT
Mayor of Stockholm: ‘We want to be the impact capital of the world’
Url copied to clipboard!