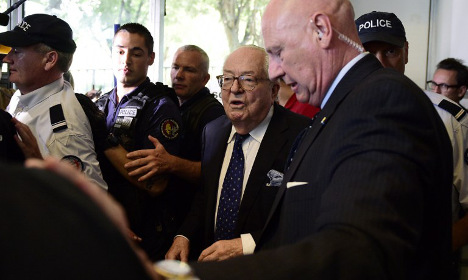 Jean-Marie Le Pen. Photo: AFP
In the latest episode of a public family feud that has divided the party, the 86-year-old appeared in court in Nanterre near Paris seeking to overturn his suspension from the FN and his removal as honorary president of the group.
“I think he'll go right to the end. He is confident, he's calm, he's combative like he always is,” said his lawyer Frederic Joachim as he and his client forced their way through a media scrum.
Surrounded by police and his protection detail, Le Pen made his way through a sea of cameras and reporters but made no comment.
Marine Le Pen, who now leads the party, suspended her father after he repeated inflammatory remarks he had made in the past, referring to Nazi gas chambers as a “detail of history.”
This appeared to be the last straw for Marine, who has sought to rid the party of its overtly racist, anti-Semitic image, and she split openly with her father, unleashing a bitter family row that has played out in the headlines.
Jean-Marie is calling for the court to overturn his suspension, which he believes is contrary to the party's statutes.
The founder of the party has “no FN credit card any more, he can't get into the building, they've reassigned his office, he can't participate in meetings,” complained Joachim ahead of the trial.
Daughter Marine however said she had “nothing to fear” from the court case.
“The courts will find that the procedure used was completely in order, that the rights of Jean-Marie Le Pen were respected in full,” she told French radio on Friday.
“I don't think this is a decisive day for the National Front,” she said, adding that the members had already moved on.
“Perhaps … he considers that the National Front is his property and that he doesn't want the National Front to outlive him,” she said of her father.