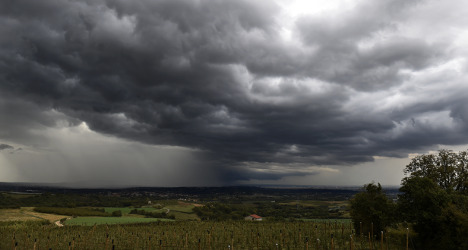 The wild weather will be hanging around until midnight on Friday. Photo: AFP

Summer may officially be here but residents of France's south west will have little joy when it comes to the weather on Thursday.

Thirteen départments in the region have been placed on "Orange Alert" – the second highest level of weather warning – with meteorologists warning of potentially violent winds of up to 100kph and heavy rain.

Hail could also be part of the mix, forecasters warn. The nasty weather is expected to strike at around 4pm on Thursday with no let-up in sight until midnight on Friday.

Friday itself should be an altogether more pleasant proposition though, with grey skies making way for sunshine in many parts of the south west.

For those in search of brighter skies on Thursday, the best of France's weather on Thursday will be in the east, with départments including Alsace and Lorraine expecting sunny weather and maximum temperatures in the high 20s.

Thursday's expected storms are set to arrive a day after three hikers were killed in Corsica in a landslide that came after heavy rains hit the island.