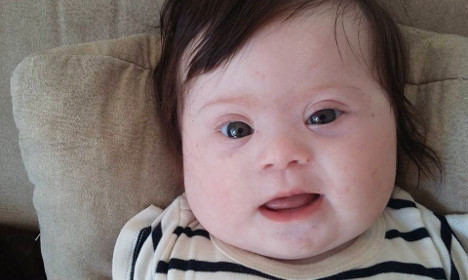 Louise and her story went viral in France. Photo: Facebook
Caroline Boudet took to Facebook on Monday to write a lengthy post about how she was sick of people's reactions to her child, Louise, who has Down's Syndrome.
“This is my daughter. Louise. She is 4 months old, and has two arms, two legs, two great chubby cheeks, and one extra chromosome,” began the post, which was shared with a picture of baby Louise.
Boudet, who lives in Alençon, in western France's Normandy, continued by telling people never to ask a mother if the illness was detected during pregnancy, and to never call a baby like Louise a “Down's Syndrome child”.
“No. She's a 4-month-old child who is suffering from Down's syndrome, or who has Down's syndrome, if you wish. This 47th chromosome isn't what she is; it's what she has. You wouldn't say, 'Oh what a little cancer sufferer'.”
She also wrote the people should never call children like Louise “they“, adding that such children have “their own personality, their own body, their own taste, their own journey”.
“Don't tell her mother, 'It's your baby, no matter what'. No. It's my baby, period. And 'Nomatterwhat' is an ugly first name. I prefer Louise by far,” the post continued.
“Words matter. They can comfort or hurt,” she wote. “There are 500 new 'Louise's mothers' every year whose days are ruined by unkind words. I know that they aren't meant to hurt. Knowing that is enough.”
Boudet made the post public and published it for her friends.
By Thursday morning the post had gone well and truly viral, being shared by just shy of 30,000 people and attracting thousands of positive comments, as well as making headlines in the French media and abroad.
Boudet has since made a Facebook group for supporters of Louise and children with Down's Syndrome which has attracted thousands of fans.

Great stand by this mom. Louise is a beautiful baby just having down syndrome doesn't define her she's so cute https://t.co/l4N6qF6IyZ

@NEWS9 Louise is BEAUTIFUL!! People with Down Syndrome are the most beautiful people on the planet!