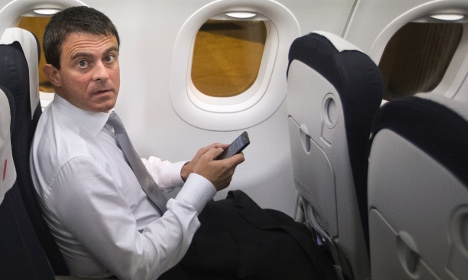 French PM Manuel Valls has admitted it was mistake to take his kids on the government plane. Photo: AFP

Valls had come under fire in France in recent days for taking a government jet to watch the Champions League final over the weekend in Berlin with his two sons in tow.

The controversy provoked howls of protest and spurred President Francois Hollande to leap to the premier's defence on Monday saying Valls was on an official trip to meet with the Union of European Football Associations (UEFA).

After days of dismissing the furore around his trip as a storm in a tea cup Valls came clean on Thursday and admitted that it had been a mistake.

“If I had to do it again I wouldn't,” said Valls on a trip the island of Reunion. “Our country has no need for a useless controversy.”

The Prime Minister admitted he was “sensitive to the reaction of French people”. An opinion poll taken on Wednesday showed 77 percent of the French public were shocked by his decision to take the government plane wirth his two children.

Opposition politicians have demanded Valls apologise and reimburse the cost of the trip to Berlin where the match took place.

Their anger was further stoked when it emerged Valls had taken his sons with him on the plane.

“So we learn that two of his children were on the trip to Berlin… the least Valls can do is pay it back,” wrote opposition lawmaker Thierry Mariani of The Republicans opposition party in a tweet.

In a move to put an end to the criticism Valls announced that he would pay back the cost of his two children taking the jet.

“To avoid any kind of ambiguity, or doubt, I have decided to to pay for the travel cost of my two children, which means €2,500.

Born in Barcelona in 1962, the French prime minister is a huge fan of Barca which won Europe's most prestigious club competition against Italy's Juventus 3-1 on Saturday.

Paris has insisted Valls was there to discuss the forthcoming Euro 2016 championship held in France but the trip has gone down badly in a country struggling through an economic crisis with more than 10 percent unemployment.

He later poured oil on the fire by talking about his “passion” for football and insisted he was entitled to moments of relaxation given his hectic workload.

A jubilant opposition has seized on the trip to denounce Valls as a prime minister out of touch with the daily reality of the French people.

And the press has been universally severe, with both Le Monde and Liberation dailies choosing the same footballing headline for their editorial — “foul”.