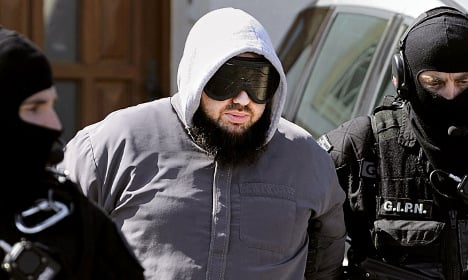 Members of a French group that said it was formed to combat Islamophobia went on trial in Paris on Monday accused of plotting terrorist attacks.

Led by 37-year-old “emir” Mohamed Achamlane, the 15 members of Forsane Alizza, who called themselves the “knights of pride”, have denied involvement in a terrorist organisation.

Achamlane told the court he had no “terrorist inspiration” and only wanted to defend Muslims against mounting Islamophobia in France.

The group was formed in 2010, gaining attention for organising protests against the government's decision to ban veils in public.

It was disbanded two years later by the government, which described it as a “private militia”.

After it was disbanded, the group put a message on its website demanding that French forces leave all Muslim-majority countries.

“If our demands are ignored, we will consider the government to be at war against Muslims,” the message said.

Achamlane told the court on Monday that he was only calling for the “legitimate defence” of his community, adding “I am not racist, I am not an anti-Semite.”

But prosecutors have put forward evidence including a list of “targets” that highlighted Jewish shops in the Paris region.

Achamlane also tried to explain why he had released videos of himself giving inflammatory speeches with Kalashnikov rifles in the background, and using phrases such as “By all-powerful Allah, we will put scars on France.”

“We wanted to make a provocative video with a wall of Kalashnikovs and my bearded head to redress the balance,” he said, specifying that he felt Muslims were “excluded” from French society.

“There is no radical or moderate Islam,” he added. “There is only authentic Islam.

A police raid in 2012 led investigators to fear the group was armed, although it remains unclear if the weapons found were real or usable.

Each member of the group faces up to 10 years in prison if convicted. The trial is due to run until June 22 or 23.