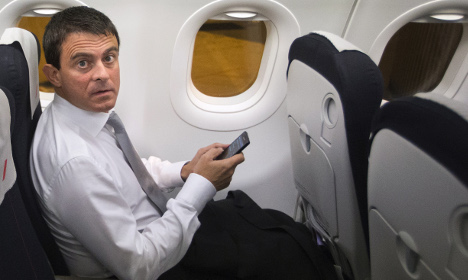 Valls himself insists the trip to Berlin for Saturday's final between Barcelona and Juventus was purely professional, but political opponents say it was “indecent”.

The Catalonia-born PM, an ardent fan of Barcelona, flew from the Socialist party conference in Poitiers, western France to Berlin on Saturday and then back to Poitiers.

On Monday he came under fire for his choice of transport and the fact he attended a match that involved no French teams.

To get to the Champions League final on time he called on the service of a Falcon 7X jet, which is used to transport government ministers on official state business. The cost of the trip is believed to have been around €20,000 (around €5,000 an hour) split between the Socialist Party and the tax-paying French public.

Just as the scandal was dying down, Valls was back in the headlines after it emerged he took his two sons with him on the jet to the final. Valls may have enjoyed his team’s 3-1 victory over Juventus but he won’t have taken any pleasure in the criticism he has received from political opponents since then.

“So we learn that two of his children were on the trip to Berlin… the least Valls can do is pay it back,” wrote opposition lawmaker Thierry Mariani of The Republicans opposition party in a tweet.

And European lawmaker and former justice minister Rachida Dati tweeted: “The reality is that the Paris-Berlin family flight took off. But employment, still has not!”

“Between being prime minister of France and a supporter of Barcelona, Manuel Valls made his choice,” said Nadine Morano from French opposition party Les Republicains

“Manuel Valls has found nothing better to do than to travel at taxpayers’ expense on the government plane to see the Champions League final in Berlin between Barcelona and Juventus,” the former minister added.

“There must have been an emergency for the prime minister of France to go and support a foreign team,” said Morano sarcastically.

The PM was also accused of making “a moral and political mistake”.

For his part Valls insisted he was invited to the match by Uefa chief Michel Platini to discuss the preparations for Euro 2016, which will take place in France next summer.

“I work a lot, I am fully committed. And occasionally, there is also time for relaxing, even if there is the tension and passion in sport,” said a very defensive Valls on Sunday, when he found time to attend the final of the French Open in Paris.

On Tuesday Uefa took the step of releasing a statement backing Valls's version of events and confirmed he was indeed in Berlin to discuss Euro2016 with Michel Platini.