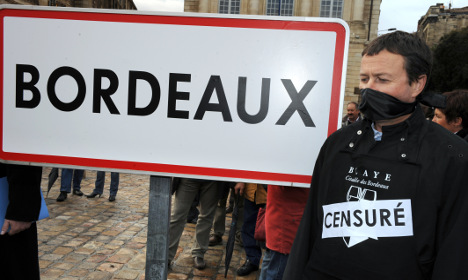 A photo from 2008 when 150 wine growers and elected officials in Bordeaux protested against the ban on alcohol advertising. Photo: AFP

Alcohol helped spark an almighty row in France on Monday with the government and its health minister on one side and wine industry chiefs on the other.

What caused the rumpus is France’s tight controls over advertising of alcohol, which were brought in back in 1991 as part of a bid to cut a worrying rise in alcohol consumption – especially among young people.

The Loi Evin, as it is known, bans TV advertising of any drink with an alcohol content of more than 1.2 percent and among other measures it also forbids French broadcasters from showing alcohol brands on players’ kits or stadium hoardings.

But those in the alcohol industry, especially the wine trade, have long fought against the law which they say is a major obstacle to their chances of success.

In a new bid to loosen the controls a French senator Gérard César, himself a former winemaker, has tabled an amendment to a government law currently passing through parliament, that would see the restrictions lifted.

César wants says law should allow for the difference between “information” on alcoholic drinks and “publicity” or “marketing” which should remain banned.

He has also won support from others in the wine trade like author Jacques Dupont, who wrote the book “Invignez-vous”.

Dupont told Le Figaro newspaper that educating people about drinking wine is the best way to fight against alcoholism.

“We live in France with this paradox: we are the country of wine, but we have the most restrictive legislation on alcohol in Europe,” said Dupont

“We are very happy to sell wine abroad, but at the same time, the message sent by the Ministry of Health is: be careful, the wine is highly poisonous!”

The author complained that it was impossible to talk positively about wine on television in France because it would be judged as “encouraging alcoholism”.

On the other side of the fence are health associations and the French Minister for Health, Marisol Touraine, who has appealed for the law not to be changed.

“I appeal to each and everyone to take responsibility,” said Touraine. “Do not change the law.”

Claude Evin, the man behind the 1991 law, who is now head of the Ile-de-France health association said the change would be a slippery slope and effectively lead to “any kind of advertising” being allowed.

Other health associations said any change to the law would be “sacrificing the health of the public for the sake of the economy.”

The reform is part of the Loi Macron – a raft of reformed aimed at boosting the French economy. MPs were set to vote on it on Monday.