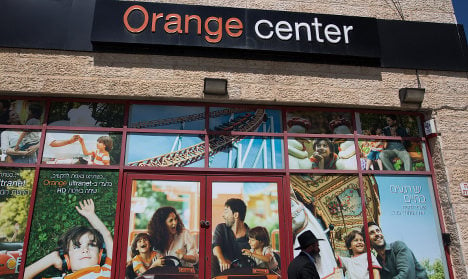 An ultra orthodox Jewish man walks past a store of Israeli telecom operator Partner, which has a licence from French company Orange to use its brand. Credit: MENAHEM KAHANA / AFP

Stephane Richard told AFP he “sincerely regrets” the furore sparked on Wednesday when he said that Partner, Israel's second largest mobile operator, would end its brand-licensing agreement with Orange.

A furious Israeli Prime Minister Benjamin Netanyahu had slammed the decision by Orange, which is part state-owned, as “miserable.”

Although the Orange boss said earlier this week that the move was not political, his remarks in Cairo came after the publication on May 6 of a report accusing the telecoms giant of indirectly supporting Jewish settlement activity through its relationship with Partner.

Compiled by five mainly French NGOs and two trade unions, the report accused Partner of building on confiscated Palestinian land, and urged Orange to cut business ties and publicly declare its desire to avoid contributing to the economic viability of the settlements.

The Orange boss's comments this week touched a raw nerve in Israel, which is growing increasingly concerned about global boycott efforts and the impact on its image abroad.

”Orange does not support any form of boycott, in Israel or anywhere else in the world,” Richard told AFP in an email. “Our decision on the use of the brand is motivated — as it is all over the world — solely by our brand strategy,” he said.

“Let me make it very clear that the Orange Group is in Israel to stay.” Israel is the only country where Orange operates without using its brand name, under a licencing agreement signed before France Telecom acquired Orange in 2000. The French giant changed its name to Orange in 2013.

Orange and Partner agreed in April to have the previously open-ended licence expire on March 31, 2025.

Richard insisted this week that it was a purely business decision, not political.

The fresh Franco-Israeli spat came after a high-profile diplomatic row in December when French lawmakers voted in favour of recognising Palestine as a state.

France's top diplomat Laurent Fabius also said that Paris and the European Union “have a consistent policy on settlement-building that is known to all.”