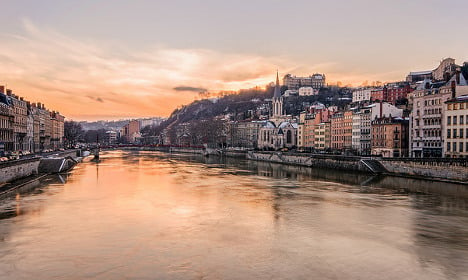 The city of Lyon is often, in fact pretty much always, overlooked by France's most popular attraction – Paris.

Yes we all know about the beauty of the French capital, its historic monuments, dining scene, spectacular river banks… and the list goes on.

But what about the city of Lyon, just a two-hour trip to the south by train? We never hear Lyon bragging about what it has to offer.

Just for starters, it's rich in Roman history and the first motion film camera was invented there, but there's actually a whole lot more going for this city than you might have thought.

With the help of a few locals, we've come up with seven reasons why Lyon may just be better than the capital. (Photo: AFP)
But first, the facts.
Now that you're familiar with the city, let's take a look at the reasons it's better than Paris.
1: Twice as many rivers (Photo: AFP)
Lyon is one of those rare cities that have two rivers running through them. The Rhône, which comes via Switzerland, and the Saône, which heads down from the north, intersect on the west side of the city.
Miranda Jayde, an Australian masters student who runs the DestinationLyon blog, says the area where the rivers merge (pictured above) has been transformed from an industrial district into what she calls “Lyon's hottest new area”.
It's known as Confluence, and offers a load of new and exciting things to do, including a shopping complex with rock climbing, the city's newest museum, and a rooftop bar called Le Sucre.
2: Location, location, location (Skiers in Tignes, not far from Lyon. Photo: AFP)
Lyon is not far from everything you want in France. The Alps are just down the road and the riviera coast is about 300 kilometres south.
Aussie student Miranda Jayde says that it's not only the French attractions that beckon, either.
“It's the perfect base for people wanting to explore the surrounding countries. The SNCF regularly releases cheap fares to Milan, Turin and Geneva, so mini-breaks in Italy and Switzerland are popular,” she says. Indeed, Geneva is less that 150 kilometres away.
Of course, there are also awesome local attractions inside the Rhône-Alpes region, like Pérouges, a medieval village, Lake Annecy and the Chartreuse national park near Grenoble. (A street in Pérouges. Photo: Ana Rey/Flickr)
Compare this to Paris, which is actually rather isolated in the north. Your nearest international option is Brussels at 280 kilometres away. And no offense Belgium, but who really wants to go to Brussels?
3: Cost of living (A look over Lyon. Photo: robin robokow/Flickr)
The difference between the cost of living in Lyon and Paris is huge. Paris is ludicrously overpriced in the first place, but take a look at these figures for the average price of a home in each city:
It's enough to make you sick. So if you end up loving Lyon, you'd be more than twice as well off buying a place there.
4. Better student life in Lyon (A closer look at the Pentes de la Croix Rousse. Photo: Net Circlion/Flickr)
Who better to ask about student life than a student?
Jayde says that the best thing about studying in Lyon is the number of other students you're likely to meet and the fact that the city really embraces the student vibe.
There's also the fact that most of the student accommodation is concentrated in three key districts (the 3rd, 7th, and 8th) – all of which are within a 40-minute walk of the bars in Vieux Lyon and the night clubs at Terreaux and Pentes de la Croix Rousse.
“Lyon is big enough to keep things interesting, but small enough that it’s easy to stay in touch with new found  friends. See someone at an Erasmus party on Friday and chances are you’ll run into them again hanging out on the Quais (Berges du Rhône in the Guillotière) on Saturday night, or chilling in the Parc de la Tête d’Or on Sunday,” she adds.

5: It's good for your French (Photo: David Basanta/Flickr)
In Paris, a lot of people speak English now. In Lyon, this is not really the case. Thanks to a slower pace of life in Lyon, the locals tend to be more open to having a conversation with a foreigner than those in the capital. And there are far fewer expats and tourists in Lyon, meaning there's less temptation to even start speaking English. And as you can see in the picture above, even the English cafe and American bar are known by their names in French…
6: The food is better (The quenelle – this one sweet – is a popular Lyonais food. Photo: Liliana Fuchs/Flickr)
We turned to the owner of Little Britain, Lyon's only English epicerie, to ask just what was so good about the food in Lyon.
“Well, first things first we have Paul Bocuse here… he's the pope of French gastronomy – maybe of world gastronomy,” Christophe Delarue tells The Local.
Indeed, this is a serious claim to fame. Bocuse is such a stalwart of the cooking scene that one of the most popular French chef awards is actually called the Bocuse D'Or after the 89-year-old himself. One his restaurants in Lyon – the l'Auberge du Pont de Collonges which serves traditional food (pictured below) – is among the very few to boast three Michelin stars. (Photo: AFP)
And the traditional food in Lyon is a must, says Delarue.
“For me, I wouldn't recommend going to one of the Michelin starred restaurants. Lyon is all about the little restaurants called bouchons, where you can get some great local food like quenelles and all kinds of offal. But be warned, it's quite heavy food, not the kind of gastronomy you find in the famous restaurants.”
7. It's good for business
Now we are not saying Lyon is better than Paris for business rather that if you did leave Paris, then Lyon is your best betfor jobs and specifically if you want to set up a business.
In a March 2016 survey the city was ranked the country's most business-friendly (apart from Paris) due to its high scores when it came to universities, infrastructure and ease of setting up a company.
It's only two hours from Paris by train and it has an international airport remember.
8: Lyon is more beautiful
Eiffel Tower? The Louvre? The River Seine? Yawn. Sure, Paris is beautiful, but it's a cliché. We're going to leave you with some stunning examples of what's on offer in Lyon. You be the judge. (Colourful buildings are always worth a look inside the town. Photo: Camil Tulcan/Flickr) (Tourists check out the view from the cathedral. Photo: AFP) (One of the many bridges in Lyon. Photo: Connie Ma/Flickr) (Detail on the outside the Notre-Dame de Fourvière cathedral. Photo: Stanil Dobrev/Flickr)
ALSO IN THIS SERIES: