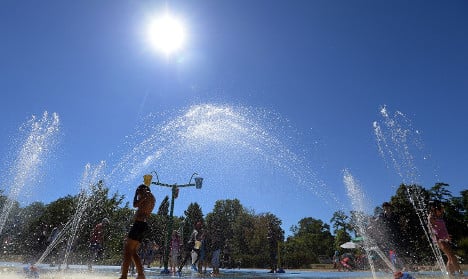 Children cool off by a water sprinkler at a park in Strasbourg, eastern France. Photo: AFP

Is France in a heatwave or not?

The answer is “not really”. There was some confusion in France on Thursday as temperatures soared to 35C and the newspapers wrote that the country was going through a heatwave.
But by definition, a heatwave (or a “canicule” as they call it in France), can't actually happen this early in the year.
Méteo France's official website says that heatwaves can only occur between June 15th and August 15th, because the nights are too long and too cool at any time before or after these dates. This means the temperatures don't remain constantly high enough to warrant the term heat wave.
But the topic is a sensitive one in France ever since 15,000 mostly elderly people died in a heatwave back in August 2003. After this period, the government launched an emergency response programme that can be activated any time between June 1st and August 31st, in which authorities can raise a three-tiered alarm system to ensure there won't be a repeat of 2003.
And on Thursday, authorities appeared to be taking the heat seriously as they issued reminders for people to take care. While it wasn't an official heat wave warning, authorities reminded citizens to be particularly vigilant, to drink plenty of water and to stay inside if possible.
Health Minister Marisol Touraine is scheduled to announce on Friday whether these measures will be upgraded to official warnings, as temperatures are forecast to reach 36C in some parts of France.
Whether it's a heatwave by definition or not, it's going to be a scorching few days in the Hexagon.
Here are the maps for Thursday, and these temperatures are expected to continue until Saturday.