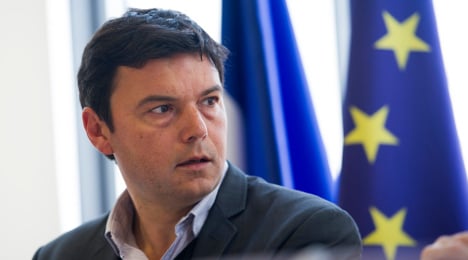 France and Germany called on Thursday for “Europe's biggest reform” to create a “deepened EU”.

Their vision for Europe was presented in a joint statement from the country's finance chiefs published in several newspapers around Europe.

“It's time to strengthen the eurozone by way of the EU's biggest reform,” Emmanuel Macron and his German counterpart Sigmar Gabriel said.

But their vision has been criticized by French economist and author Thomas Piketty, who told The Local on Thursday that it “fails to respond to Europe's main challenge: the democratic deficit”.

Piketty did describe the Franco-German proposals as “interesting” but questioned their idea of creating a “euro commisioner” who would be answerable to a separate bloc of eurozone MPs in the European Parliament.

“The euro commissioner could embody this stronger eurozone focusing on fiscal policy but also on growth, investment and job creation,” said the statement from the ministers.

But Piketty said this proposal simply does not go far enough.

“In my view, a popular majority in the eurozone (or in the subset of countries that would accept to enter such a scheme) should be able to choose the policy they want,” he told The Local.

“This cannot happen with rigid budgetary criteria and unanimity rule for fiscal decision.

“Gabriel and Macron refer to the idea of a eurozone grouping of the European Parliament, but they do not say exactly what power it will have.

“I doubt that this will be the place to take majority decision making about deficit level and taxation.

“In order to do this I think we need to involve national parliaments through a new eurozone chamber. More direct democracy might be necessary,” he said.

The economist has been heavily critical of the way the eurozone has been run since the debt crisis in 2008.

He recently told The Local and other members of the Anglo-American Press Association that if Greece was allowed to leave the eurozone it would spark “the beginning of the end” for the single currency.

“It would be a catastrophe for the eurozone if Greece were pushed out. It would be the beginning of the end of the single currency,” he said.

“People every morning would be asking ‘who will be the next to leave?’ That would be the beginning of the end. And the governments of France and Germany have not prepared public opinion for such an eventuality; they would have to do that very quickly.”

Piketty has also slammed the way the talks over the Greece crisis have been held in almost secrecy.

“This is a perfect example of why we need some political involvement in the economic policy surrounding the single European currency,” he said.