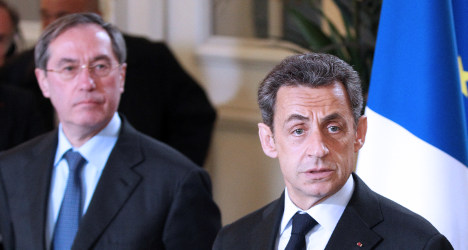 Claude Guèant, seen here on the lft of Sarkozy, was one of those held in connection with a police corruption probe. Photo: AFP

Three of Sarkozy's former advisors, as well as his former cabinet director and two others who served as secretary-general in the presidency were taken into custody in the latest legal saga involving France's former leader.

Police are probing charges of “favouritism” and “embezzlement” in the awarding of presidential contracts to nine polling institutes, without tenders being issued.

One of the companies which won a contract was owned by a close advisor to Sarkozy.

The case is one of several fraud probes that have ensnared the 60-year-old former president who made a dramatic return to frontline politics last year and quickly won back control of the opposition.

In a bid to makeover the centre-right UMP, which has been battered by infighting and financial scandals, Sarkozy last week renamed his party The Republicans.

Despite his legal woes, he is expected to make another run at the presidency in 2017 elections.

Last July, Sarkozy became the first former head of state to be taken into custody for questioning when he was charged with influence-peddling and violation of legal secrecy.

He is accused of conspiring with his lawyer to give a magistrate a lucrative job in exchange for inside information on yet another corruption probe related to campaign financing.

Separately, French judges are investigating PR firm Bygmalion, which is accused of falsifying invoices to get round spending limits during Sarkozy's 2012 presidential campaign.