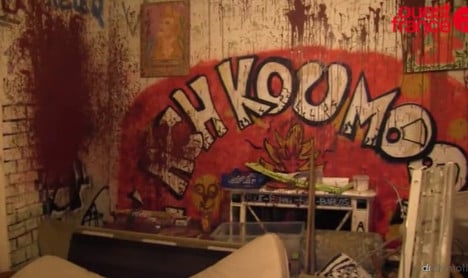 In image from inside the house of 83-year-old Maryvonne, that was vandalised by squatters. Photo: screengrab Ouest-France.

For soon to be 84-year-old French widow Maryvonne it was a bitter sweet victory.

First came the good news that a court had ruled in favour that the squatters, who for 18 months had occupied her home in Rennes, western France, were to be evicted.

But then came the moment when her family finally got back into her house and saw the scene of devastation. (Squatters hang banners from the balcony declaring their right to stay. Photo: AFP)

“I am sickened, they have wrecked everything,” her son Pierre Thamin told Ouest-France newspaper.

Images taken from inside her house show walls are covered in graffiti, much of it anti-fascist, litter strewn around the floor of every room, computers smashed to pieces.

And the squatters even left a rather bizarre insult to the son himself, daubing one wall with the words “Pierre Thamin, big fascist”.

Maryvonne, infirm and visually impaired, had left her house to live with her partner, which gave squatters the opportunity to move in. They defended their right to be there saying the house had remained unoccupied for seven years.

But when her partner died she tried to return but found her home occupied with the squatters refusing to budge.

At first it appeared they would be able to keep her out of her home permanently, due to a law in France that says home owners must take action within 48-hours of squatters moving in. If not they could be left powerless. But after her story gained nationwide coverage a high court judge ruled that police could finally throw them out.

But it may be a long time before she can get back in.

“The house is totally uninhabitable,” said her son.