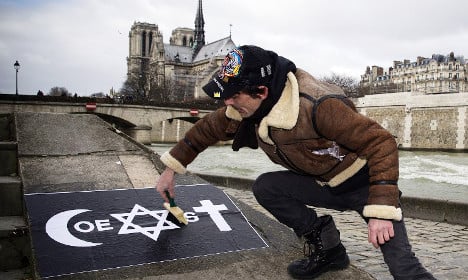 A man in Paris sticks a poster urging the coexistence of religions, using intertwined symbols of the Muslim, Jewish and Catholic religions to write the word "Coexist". Photo: AFP
A glance at the French media in 2015 may suggest that there's a growing problem with French attitudes towards the Muslim and Jewish communities.
Indeed, there have been acts of violence and abuse committed against both minority groups ever since January when 17 people were killed by radical Islamists in Paris.
In the two weeks after the attacks, for example, there were 128 anti-Muslim incidents registered – which is almost the same number as in the whole of 2014. The number of anti-Semitic acts, on the other hand, jumped from 423 in 2013 to 851 last year.

(French police have been on alert since the Charlie Hebdo attacks in January. Photo: AFP)
One could be forgiven for thinking that attitudes towards the groups — the largest in Europe with an estimated four to five million Muslims and around 600,000 Jews — are on a downward spiral.
But new research suggests the shocking rise in attacks does not reflect an overall hardening of views towards Jews and Muslims in France.
In a six-nation comparative study, the Pew Research Centre, based in the US, has found that 92 percent of the French have a favorable view of Jews, up from 89 percent in 2014, and far more than the 72 percent in 1991.
This was a more positive result than those from all the other countries surveyed, with the UK at 86 percent and Germany at 80 percent (compared to 53 percent in 1991). The study noted that the strongest anti-Semitic sentiment was in Poland, where 28 percent have an unfavourable view of Jews.
Marc Knobel, head of studies at France's Jewish umbrella organization CRIF told The Local that while the French public were overwhelmingly tolerant towards Jewish people, old prejudices remain.
“The French have a high tolerance towards French Jewish people, who do not face discrimination in France, when it comes to jobs or housing etc,” he said.
“Nevertheless the situation for many Jewish people in France remains difficult, especially when there is an important of the Israeli-Palestinian conflict, which leads to a rise in Anti-Semitic acts.
“There is still the existence of people harboring old prejudices towards Jewish people, when it comes to money or power,” he said.
Knobel added that many French people do not understand that most racist acts are committed against Jewish people and that polls show that fighting anti-Semitism is not a priority for them.
READ ALSO: Muslims in France – 'They say we're not French' (Parisians at the markets in La Goutte d’Or. Photo: David Dufresne/Flickr)
Meanwhile, 76 percent of the French people surveyed had favourable views of Muslims. This was higher than the other countries in the study, including the UK at 72 percent, Germany at 69 percent, and 52 percent in Spain.
The Roma community, also known as Gypsies, were seen in a far less sympathetic light.
Sixty percent of the French were recorded as having an “unfavourable attitude” towards the Roma, compared to 86 percent of Italians. The UK and Germany were recorded as having a “favourable attitude” overall, with 54 and 52 percent respectively responding they regarded the community positively.
Despite the low ratings, the views of Roma across the board actually increased on average over the last year from 38 percent favouable to 47 percent.

(Inside a Roma camp in France. Photo: AFP)
France has a sketchy track record when it comes to the Romas in recent years. Two weeks ago, a UN rights watchdog group expressed alarm “at the growing stigmatisation of the Roma” and “the increasing hate speech against them”.
This was underlined in December when a right-leaning French mayor sparked outrage by refusing to allow the burial of a Roma child because the burial space was reserved for local taxpayers. He later apologised to the family.
The rights group also noted that the Romas right to housing is “incessantly attacked”, and that their campsite evictions were often accompanied by “excessive police force”.