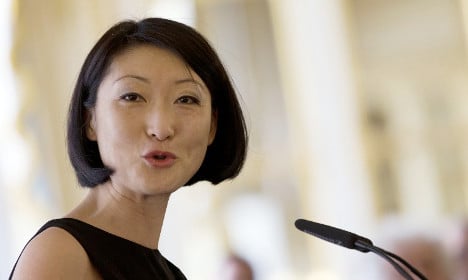 France's Culture Minister Fleur Pellerin. Photo: AFP
Culture Minister Fleur Pellerin on Tuesday slapped “national treasure” designations on three objects among some 200 lots that are due to go under the hammer in Paris on September 29th, the US-based auction house said, confirming a report by the newspaper Le Figaro.
The items are: a household accounts book for the Chateau of Amboise, a Loire Valley residence favoured by France's royals in the 15th and 16th
centuries; a painting of the 17th-century king Louis XIII; and a portrait of the duchess of Orleans.
The order means those items will not be auctioned and cannot leave France. The government has 30 months to find the money to buy them for the state's collection.
Sotheby's auction of other royal items owned by the Orleans family will still go ahead, however. Among the lots on offer are various precious paintings, a piece of a cloak worn by the 13th-century king Louis IX, and a 17th-century drawing book with sketches inside made by Louis XIV as a boy.
The family, which forms one of several lines of pretenders to France's abolished throne, aim to raise five million euros ($5.6 million) from the
sale, which will go towards paying hefty inheritance taxes.
The family have already carried out three other auctions since 1999 for the same end, which raised an aggregate five million euros.