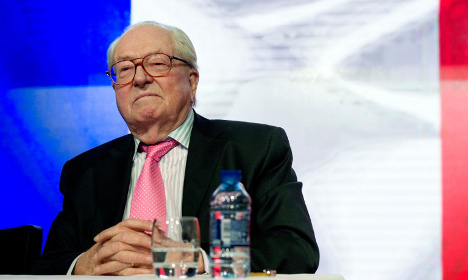 Jean-Marie Le Pen. Photo: AFP
“I am contesting my exclusion as a member,” said the veteran Le Pen who said he was suing the FN at a court in Nanterre, close to Paris.
The 86-year-old was suspended from the party, now led by his daughter Marine, after comments he made playing down the Holocaust.
At the time, a furious Le Pen described his suspension as a “criminal act” and said he wanted to disown his daughter, ordering her to “give up her name”.
He warned party officials should expect him to use “any means” to fight the decision and said he would found a new grouping.
The FN's executive suspended him from the party on May 5th and said it was also considering stripping him of his title of honorary FN president.
FN members will receive a postal ballot on “a number of questions”, including whether to scrap the role of honorary president, currently held by
Le Pen senior.
“It's a Stalinist method, not very commonplace on the right” of politics, joked Le Pen.
The bete noire of French politics hit the headlines with inflammatory comments about Nazi gas chambers which he said were a “detail” of history.
He also praised France's collaborationist World War II Vichy regime.
The remarks repeated comments the octogenarian European Parliament member had made in the past but they appeared to be the last straw for Marine, who has worked hard to rid the FN of its overtly racist, anti-Semitic image.