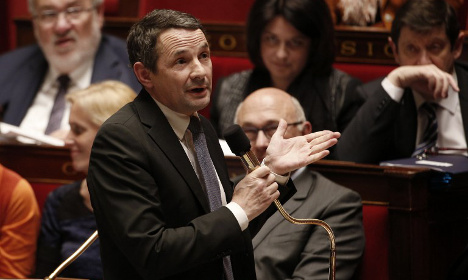 France's Junior Minister for State Reform Thierry Mandon was behind the new measures. Photo: AFP
France, a country famous for its complicated red tape at every corner, has announced a new raft of measures aimed to simplify administrative procedures for the French.
After François Hollande announced his “simplification shock” after being elected, it's the third time the government has announced measures to cut burden of bureaucracy.
“It's not necessarily a revolution but it will mean the end of certain bureaucratic absurdities,” an aide to France's Junior Minister for State Reform Thierry Mandon, the man behind the reforms, told Le Parisien newspaper.
The minister himself however told the newspaper that “We are going to revolutionize the relations between individuals and the administration.”
The aim is to both to save money and simplify life for ordinary members of the public, but also make up ground on countries like German and the UK, where efforts have been made to remove as many administration obstacles as possible that impinge on economic growth.
Many of the new plans involve moving administration services online, which will no doubt come as welcome news to anyone who has found themselves at the wrong end of a queue at a public administration office in France.
These move from paper to online format includes:
Another measure will see the end of jobseekers having to send off two sick notes to the Pôle Emploi and the other to the state run “Caisse d'assurance maladie” to make sure their benefits were covered.
The measures, 92 in total  (around 50 for businesses and 40 for individuals) are part of a long-term plan he hopes will save France €11 billion by 2017.
The announcement was made on the same day that an OpinionWay survey revealed that the number one source of time wasting for the French public was on administration, followed by queuing in shops and waiting at a doctors surgery.
Indeed, the cuts are the latest stage in the series of improvements made by the government which have saved France €3.3 billion since September 2013.
A further handful of the measures were aimed at helping out the disabled.
In April last year, France unveiled fifty measures to make life easier for companies in a bid to spur business growth. Some 75 percent of these have already come into effect – breathing much needed life into France's gloomy economy.
In July 2013 The Local reported how France was to cut red tape in order to make life much simpler for the public.

A set of 201 measures were launched, that could go some way to making “l’administration” more modern and user-friendly.

The government said the measures, which touched everything from speeding fines to ID cards and restaurant vouchers will save the country €3 billion ($3.9billion) in 2014 by speeding up and simplifying the interactions between the French state and those who live and run a business in the country.

One of the proposals was to make payslips easier for them to read. Though the amount of taxes workers pay would not change, the reform would consolidate the number of bodies who appear on employees’ ‘fiche de paie’ (payslip).
Last year President François Hollande said himself that red tape and state bureaucracy slows everything down and is a drain on French finances.
Mandon says he is not finished either and says another 50 or so measures are in the pipeline before 2017.