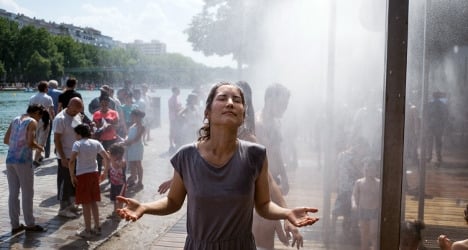 Get set for the warm weather in France. Photo: AFP

Summer is forecast to arrive in France with a short sharp bang this week with a heatwave set to hit most of the country from Thursday until Saturday.

The French weather website Meteoconsult.fr predicts that the high temperatures, which are forecast to reach 35C in some parts of France, could set records.

The heatwave is likely to be intense but not to last too long. Although those living in the north west of the country shouldn't get their hopes up too much. Early forecasts say its likely to be warm but wet over this part of France.

Temperatures in the cities of Paris, Lille, Lyon, and Bordeaux are forecast to peak above 30C. In areas like Alsace, Rhône Alps and the south, temperatures could rise even higher.

This is what the weather map looks like for Friday and Saturday. But sun-seekers shouldn't get too used to the baking temperatures.

In parts of the country the mini-heatwave is predicted to be washed away in violent storms on Sunday and Monday as cooler air arrives over the country. (The temperatures in Paris will hit the mid-thirties on Friday. Photo: MeteoConsult)