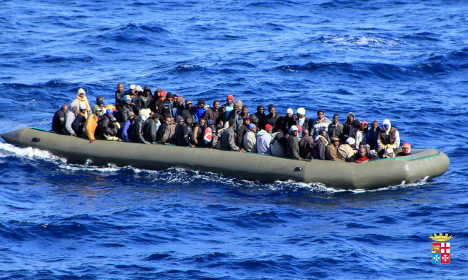 Migrants on a rescue boat head to Europe.Photo: AFP
The two European powerhouses said there was insufficient “balance” in the European Commission's controversial emergency measures for relocating tens of thousands of migrants around Europe.
“Deep discussions are necessary at the European level” to achieve a balance between “responsability” and “solidarity”, said a joint statement from the French and German interior ministers, who said countries' “efforts already undertaken” in welcoming asylum-seekers should be “better taken into account”.
Brussels released plans for EU countries to open doors to around 60,000 refugees – 40,000 who are arriving or set to arrive in Italy and Greece and to grant asylum to another 20,000 who are currently outside the EU.
France was told to open its doors over 9,000 refugees over the next two years, with Germany's figure closer to 12,000.

The mandatory relocation scheme which will apply to refugees from Syria and Eritrea to relieve the pressure on Greece and Italy, is only intended for those “in clear need of international protection” and will be put in place for two years.

With each country effectively given a quota, France has been told to take in 4,000 migrants fleeing Africa and the Middle East who have arrived in Italy and another 2,700 that have spilled across the border into Greece – meaning almost 7,000 in total.

That compares to Germany which has been set a quota of 8,700 from the two countries and Sweden which must take in around 1,300 migrants from Italy and Greece.

The quotas were worked out on a special calculation that looked at each country's population size, GDP, unemployment rate and the number of refugees it had already accepted.
But Paris and Berlin said: “Additional solidarity is only possible if the member states at the first point of entry… take, with support from the European budget, all the financial and legal measures possible to boost surveillance of the external borders.”
France and Germany proposed the establishment of so-called “hotspots” to process asylum-seekers close to the point of entry to identify them and then decide where to place them.
“Part of the asylum-seekers in obvious need of protection will be relocated in other member states, using the redistribution ratio agreed,” said the Franco-German proposal.
“Irregular migrants” will quickly be returned or removed, according to the proposal, adding that “better contacts” needed to be established with their countries of origin to ensure an easier returns process.
“Migrants that do not belong in either category will have their situation examined within the framework of the common asylum procedures, in the country of first entry,” proposes the Franco-German plan.
Additionally, the two countries called for “solutions to limit secondary migration movements” which is putting at risk the idea of sharing the burden between EU states.
French president François Hollande has recently said that he was against any kind of migrant quotas, echoing concerns raised in both Spain and the UK.

“People who come because they think that Europe is a prosperous continent, even when they are not hired by companies… must be escorted back, that's the rule,” said Hollande.

“So one cannot talk of quotas, there can't be quotas for these migrants,” he said, adding that quotas for  “the right to asylum” would not make sense.”