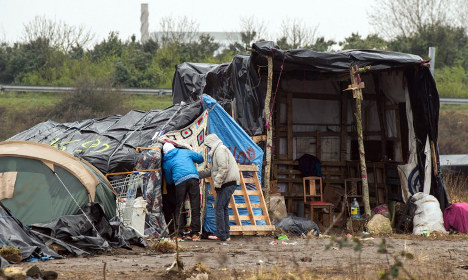 According to the emergency services, the fight began after a makeshift tent was torched. The brawl escalated quickly into running battles with iron bars.
This is the latest incident between migrants desperately hoping to reach Britain from France.
Around 2,300 migrants, mostly from Sudan, Eritrea and Syria, live in the makeshift tent village in Calais known as “the jungle”.
One aid organisation recently told The Local that the area was the “worst refugee camp in Europe”.
READ ALSO: New Calais migrant camp 'the worst in Europe'

Calais is the main staging post for migrants trying to reach Britain from continental Europe without official documents, usually by smuggling themselves aboard one of the thousands of trucks that leave daily via the port and cross the Channel by ferry.
Last week, a migrant suffered a gunshot wound, apparently after a battle between smugglers.
It's not only violence among the migrants in the area that is making headlines in France – last month footage appeared to show local police assaulting them too.
The police have since launched an internal probe after the footage showed officers violently ejecting migrants from trucks and apparently spraying them with tear gas.