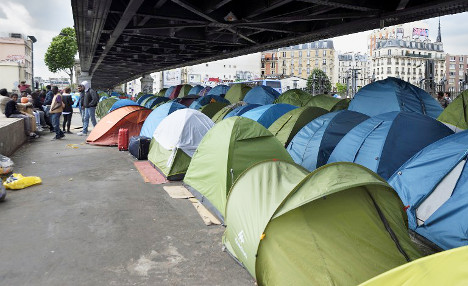 Hundreds of migrants, mostly from East Africa, live in this camp, some for a year, under the elevated railway near the Porte de la Chapelle. Photo: AFP
The migrants had been camping beneath the overground Metro tracks near La Chappelle, just around the corner from the Gare du Nord and the Eurostar terminal.
The migrant camp underwent the first stages of evacuation on Thursday, however, prompted by French police, who said last week that the migrants were in “imminent danger” of falling sick.
This came shortly after a report from France's health authorities revealed there were risks of epidemic sicknesses spreading.
“We don't want these people to have to live with these kinds of hygiene and health issues,” Dominique Versini, Deputy Mayor of Paris, told the Planet news site, which blamed the evacuation on a scabies outbreak.
One of the migrants from Sudan told the RTL radio station that he had been eating food out of the bins. (Conditions at the migrant camp were horrific. Photo: The Local)
It remains unknown where exactly how police will handle the migrants' relocation, but one thing remains clear – the migrants don't intend to stay in Paris. Indeed, the reason many chose to stay in the northern reaches of the city is for easy access to the Gare du Nord train station, from where trains head daily to Calais in northern France.
When The Local recently met with migrants at the camp, many said they were just waiting for the opportunity to take a train to Calais, which would just be another stop-off point on their way to the UK.
“I have tried three times to get on a train to Calais, but each time the police caught me and threw me off,” 21-year-old Amanuel, from Eritrea told The Local.
“We try to hide in the toilets, but it’s difficult. We’ll try again. That’s our life for the moment – but we hope it will get better once we reach the UK.” (Amanuel, 21, from Eritrea, pictured here on the left, hopes to make it to the UK. Photo: The Local)
After reaching Calais, conditions aren't likely to get better for the migrants, most of whom come from Eritrea, Sudan and Ethiopia. There are an estimated 2,500 migrants living at a camp on wasteland at the edge of the city – dubbed by the migrants as The Jungle II.
One aid organisation recently told The Local that it is the “worst refugee camp in Europe”.
They also know the perils of trying to get across the Channel to the UK, with several migrants having been crushed under the wheels of lorries or having suffocated in their holds.
News of the camp evacuation comes just days after the European Commission announced its controversial emergency measure to relocate tens of thousands of migrants around Europe, with France asked to open its doors to over 9,000 refugees over the next two years.