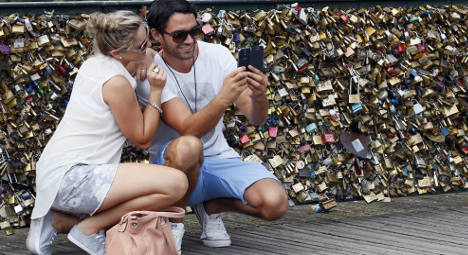 A couple take a selfie on the Pont des Arts in front of all the love locks. Photo: AFP

The locks will begin to be definitively removed from the bridge as of Monday, a statement from Paris Town Hall said this week.

The phenomenon of tourists “locking their love to the bridge” has left the Pont des Arts in a state of disrepair and left many in Paris frustrated at the Town Hall's seeming unwillingness to tackle the issue. But Paris and its mayor Anne Hidalgo have finally decided to act.

“Hundreds of thousands of locks are attached to certain bridges around Paris,” said a statement from the Town Hall.

“This phenomenon generates two problems: a lasting degradation of the heritage of Paris and also a risk to the safety of visitors, Parisians and tourists,” the statement read.

The Pont des Arts will have to be closed for a week in July so the locks can be removed.

The city has commissioned international artists to decorate 110 panels to be installed along the bridge’s parapets as a temporary measure, but one more aesthetic the graffiti-covered plywood currently marring the historic bridge.
In October glass panels will be installed permanently on the Pont des arts and the Pont de l'Archeveché, which is also suffering under the weight of tens of thousands of padlocks.
“This is a strong first step, one that sends a clear message to tourists: Paris does not want “love locks”, Lisa Anselmo from the No Love Locks campaign told The Local. “We are thrilled, and hope this is the beginning of the end for this destructive trend.”
READ ALSO: Whatever happened to Paris's beautiful bridges? The glass panels were trialed recently on the Pont des Arts and the Pont de l'Archeveché and were deemed a success as they were more resistant to graffiti than the ugly wooden panels that now adorn the bridge.

On the other hand the Town Hall's attempt last year to encourage tourists to take selfies and post them online rather than buy a padlock was judged a failure.

Those behind the No Love Locks campaign are however still urging Paris to get tough and ban the locks out right and hand out fines to those caught “vandalising” the bridges.

“The fight is hardly over. More than 11 bridges and several landmarks, including the Eiffel Tower, are  still profoundly effected by tourists’ “love locks” said a statement from the campaign.
“No Love Locks believes only an official ban—and communication and enforcement of this ban—will to push for this outcome.
The Town Hall has so far refused, not wanting to earn a bad reputation for being too harsh on Paris's legion of tourists.
However news of the recent move has gone down well with The Local's readers.