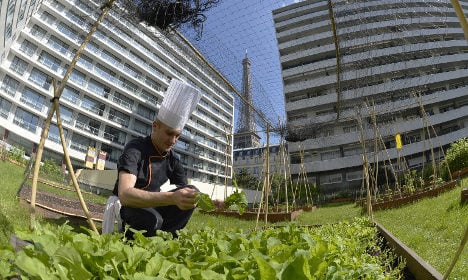 Frame Brasserie sous-chef Ogier Pottiez picks plants the rooftop of the Pullman Eiffel Tower hotel in Paris. Photo: AFP
In the shadow of the Eiffel Tower, a chef in a tall white toque bobs between great bushes of herbs as busy as the bees buzzing through beds of strawberries and tomatoes.
Even slap bang in the middle of Paris, chefs are taking the slogan “eat local” to heart, planting kitchen gardens on the roofs of their restaurants.
Ogier Pottiez, 30, of the Frame restaurant at the Pullman Paris Tour Eiffel, fills his basket with strawberries and mixed salad leaves as he hunts down purple chive flowers with just a hint of garlic in the hotel's rooftop plot.
“Our salads change every day depending on what we pick, and with no need for transport, they arrive ultra-fresh and perfumed on the plate,” he said.
This rare patch of green abundance in the French capital's densely populated core is a paragon of circular eco-thinking. Eggs for the Sunday
brunch are laid by chickens fed on leftovers from the kitchen, while honey for the pancakes comes from the bees in five hives on the roof who pollinate the garden's fruit and vegetables.
The one drawback, however, is that even at a relatively extensive 600 square metres (6,450 square feet), the garden cannot supply anything like the restaurant's vegetable needs. (Pottiez shows off his haul. Photo: AFP)
– Magic potion –
One of the pioneers of Parisian kitchen roof gardens is Yannick Alleno, who started with a little herb garden above his restaurant Le Terroir Parisien.
He brought in Nicolas Bel, a young eco-driven engineer to create it, and Bel is also the brains behind the garden at the Pullman hotel.
With his startup, Topager, he hopes to pull off the triple challenge of not only making urban agriculture both ecological and fashionable in France, but also making it pay.
He already has other projects on his books, including another Parisian roof garden almost twice the size of the Pullman's.
Paris may be behind New York and Montreal in terms of the surface area of roofs planted, but it is ahead in terms of “environmental coherence”, Bel claimed.
A delegation of politicians and officials from New York has just come to see his work, curious to find out about his methods.
The secret of his success in producing organic vegetables of comparable quality to those grown in market gardens rests on a magic potion he has put together with France's national agricultural research institute, the INRA.
The key is the rich substrata he creates from urban organic waste such as coffee grains, grass and wood cuttings, which are both lighter and richer than normal soil. To this he adds fungus spores and a liberal dose of earthworms and compost.
– Above the pollution –
Pollution is not quite the problem you might imagine in urban gardens, Bel said. The hole in the ozone layer “does not affect vegetation”, he said, and roof gardens tend to be above the layer of air pollution particles which linger close to the ground.
“In cities the pollution at ground level can be a problem, and lead to heavy metals getting into vegetables through their roots. But our analyses
show pollution levels in our plants grown higher up are very low, around 10 to 30 percent of European norms,” he added.
The restaurant roof gardens in Paris tend to work on organic lines. Basil and carnations are planted next to tomatoes to keep away aphids, with black soap used as an insecticide and nettle manure to push on plants that fail to thrive. Crops are rotated with the seasons so as not to exhaust the soil.
But work still needs to be done to make the gardens pay for themselves.
The city's newest rooftop garden, opened in March above the Ferrandi school of gastronomy, hopes to help crack that problem.
“The idea is that a roof garden should not just be reserved for haute cuisine. We want to show that it can pay its way on what can be harvested from it,” said Pablo Jacob, a 25-year-old future chef in the last year of his studies.
The materials for the sixth-floor Ferrandi garden, with its large wooden plant boxes set across a terrace, cost €7,500 euros ($8,200).
Pablo picked up a sprig of oysterleaf — “mertensia maritima” — a rare herb with a strong taste of the sea, which even on the wholesale market costs a small fortune per portion.
“You have to choose plants with high added value, and it takes time,” he said in front of his boxes of sage, melissa and woodruff.
The young chef discovered the huge “panoply of flavours” from just-picked flowers, fruit and vegetables when he spent some time helping in the kitchens of three-starred Michelin chef Michel Bras in Laguiole in France's central Aveyron region.
The eat-local mantra which is developing not just in the countryside but “in the middle of Paris is the big thing for future chefs”, he said.
“It is not just a trend, it's here to stay.”