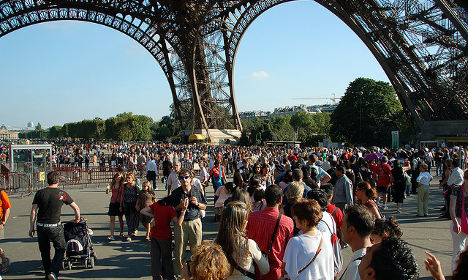 Crowds regularly swarm beneath the Eiffel Tower. Photo: Krzysztof Belczyński/Flickr
A police source said that the members of the Eiffel Tower gang – who were aged between 17 and 47 – would walk away with up to €4,000 a day each. The thieves, all ten of whom were Romanian nationals, had operated for two years at the Eiffel Tower and the Château de Versailles, perfecting their craft.
Officers spent about nine months on the case, with one telling French newspaper Le Figaro that it involved a “tremendous amount of investigative work” on par with solving a drug trafficking case.
So how exactly were these thieves managing to “earn” up to €4,000 – per person – a day?
Here's a rundown of their ploys and tactics. 1) Becoming a tourist
Who's the last person you'd expect to be a full-time pickpocket in Paris? A fellow tourist of course.
The Eiffel Tower gang would sometimes dress up as tourists so as not to arouse suspicion, sometimes even buying tickets to go up the tower. Most people are cautious about keeping an eye on their belongings while at the bottom, then relax their guard on the upper levels.
SEE ALSO: Top five street scams to avoid in Paris 2) The selfie trick
Forget the selfie stick – this is the selfie trick. Gang members would use any excuse to block a passageway – such as taking a selfie up on top of the tower – while other tourists were forced to wait for them. Meanwhile, an accomplice would fleece those who got held up waiting
3) Driven to Distraction
The selfie trick is just one of the ways the pickpockets will use to divert the attention of tourists, who are easily distracted whilst enjoying the most spectacular view over Paris.
Other distraction techniques used involve anything as simple as asking them asking your for information that they obviously don't need, holding up queues or suggesting they need help with something. (The gang wasn't shy about sharing their hauls on social media. Photo: BFMTV)
4) Working in teams
Of course these distraction techniques are only possible because the thieves are expert team workers.
By the time you notice your wallet is gone, it is often far, far away. But frighteningly, the thief could still be standing right by your side. This gang operated in threes and fours, with one working as a distraction while their partner robbed their victims. A quick switch of the hands and a third person has your belongings, soon to be passed off to another.
This means that even if you noticed something was up and you apprehended one of the pickpockets, the chances are that whatever they took has already been handed over and you won't have been able to follow the flow.
Considering how many people are wandering about on and around the tower, your guess is as good as ours as to who in the crowd has your wallet in their pocket.
SEE ALSO: How to avoid getting robbed on the Paris Metro 4) Asian targets
The suspected thieves knew exactly where to look for quick cash. Police sources have told French media that they often preyed on Asian tourists due to their propensity to carry around large amounts of cash. Asian tourists, particularly from China, have long fallen victim to acts of petty crime in Paris. Some 50,000 Chinese people signed a petition last month to try and get the Prime Minister's attention on the matter.

5) An accomplice on the inside?
While not confirmed, there have been whispers before that pickpockets can have inside sources at tourist attractions. According to information obtained by French newspaper 20 Minutes, a security guard at the Château de Versailles was arrested in 2013 on suspicion of helping pickpockets in exchange for €2,500 a month. It remains unknown if the Eiffel Tower Gang had a member of staff helping them out, and no reports of arrests have emerged.
6) Being mobile
The gang had no fixed abode in the capital and would most of the time stay in hotels, living something of a life of luxury on their “earnings”. The website 20 Minutes reported that they racked up a €100,000 bill in one Paris hotel in the space of 2014 alone. They would also travel to and from the Eiffel Tower or Versailles in taxis.
7) Quick transfers
The gang didn't mess around once they got hold of tourists' money. They were said to send it almost immediately via Western Union or Moneygram back to Romania, where network heads would invest it in property. (The gang wasn't shy about sharing their hauls on social media. Photo: BFMTV)