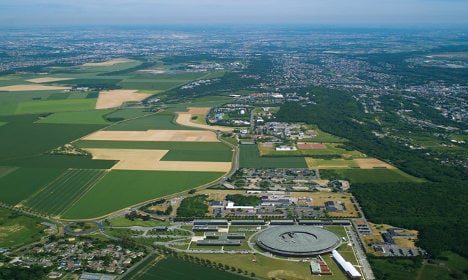 An aerial view of the Paris-Saclay campus. But can it really rival Harvard or Oxford and Cambridge? Photo:

After decades of planning, a new generation of students and researchers will start their first full academic year in September 2015 at the University of Paris-Saclay, a huge, ambitious project to bring together a group of 19 higher education institutions alongside a business cluster on the outskirts of the French capital. It has been dubbed the French Silicon Valley.

The rationale behind Paris-Saclay is to reach the same size and level of excellence as Harvard, MIT, Oxford and Cambridge. With its higher education institutions already attracting 15% of the potential research budget in France, Paris-Saclay should give birth to Europe’s top multi-disciplinary university, and bring a well-needed boost to France after years of shame caused by poor performance in global university rankings.

Formally incorporated in 2014, the University of Paris-Saclay has federated together two universities, ten grandes écoles (professional schools in engineering, agronomy, telecommunications, life sciences and management), and seven national research institutions – or at least some of their laboratories. There is a great variety in the institutions which are a mix of private, public and non-profit. Some are non-selective public universities that cover a wide set of disciplines, such as the University of Paris-Orsay. While others are highly selective and elite grandes écoles.

Covering the whole scientific spectrum from education and basic research to technology and development, the university is strongly linked to a technological cluster set up in Saclay in 2004. The campus and cluster are set on 7,700 hectares of land and have already attracts giant global firms such as EADS, Siemens, EDF, Thales or Danone, as well as more than 300 small and mid-size firms. The MIT Technology Review already lists Paris-Saclay as one of the eight world innovation clusters.

While some of its members, such as HEC and the University of Paris Orsay, are already located on or near the Paris-Saclay campus south of Paris, others will move out of Paris within the next three years.

The first full academic year will start in September 2015, but the campus already hosts 300 research laboratories and 15,000 faculty and doctoral students. Together, its institutions will offer 17 doctoral programmes, eight schools from law and political science to biology and medicine, and 49 masters programmes. The ambitions to build an internationally visible flagship industry cluster and university have been supported at the highest levels, from the president and ministries in charge of higher education and research. Without taking into account indirect costs and subsidies, the state has allocated more than €6 billion for buildings, innovation projects and transportation infrastructure. The university has already collected €2.5 billion in cash from the state to construct new buildings and fund research and education projects, according to my interviews with people closely involved with the project. Although the Paris-Saclay project did not generate loud opposition from either the right or left wing political parties, there has been some resistance to the project since the early 2000s. Local authorities criticised the state for forging ahead with the project without the formal agreement and support of the mayors of the communes of the territory in and around the Saclay plateau. Student unions feared that taxpayer money allocated to the project would only benefit the elite and would hinder the modernisation of all other universities across France.

Some influential alumni from the grandes écoles, such as the Ecole Polytechnique, privately claimed that their alma mater should remain oriented toward selecting and educating top public servants and business leaders, and not become too research-focused or “academic”.

The legal status of the University Paris-Saclay is unique in France: it is not formally a university but rather a “COMUE”, a community of universities and higher education research institutions.

After a slow start in 2008, the building of the new campus has accelerated since the end of 2013. Integrated programmes across the different institutions have been designed to start this autumn. Already, 80% of the masters programmes offered by the various institutions are already under the banner of the University of Paris-Saclay – which will help to make the university more visible on international rankings. The new university is headed by a team of academic administrators, some with good experience of running public agencies and laboratories. A board joins the heads of the various member institutions together and an academic council of 220 members, the majority elected by faculty, staff and students, has been granted an advisory role, functioning as an arena to generate academic consensus.

A major test for the new university will be its capacity to increase its attractiveness for international students and faculty in a highly competitive global higher education market.

Jean-Claude Thoenig is a Senior Research Fellow (em.) at the French Centre National de la Recherche Scientifique and affiliated with Dauphine Recherche en Management (Université Paris-Dauphine). A more complete version of his article was first published on the website Conversation.com.