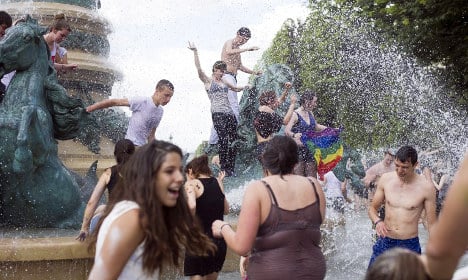 Marchers at one of the previous Paris Pride Parades. Photo: AFP
June 6th, The Festival of Hot Air Ballooning, Annonay (A reconstruction of the first ever hot air balloon ride. Photo: Mairie Annonay)
Trivia question: Where was the first hot air balloon flight (and bonus points for when)?
Answer: In Annonay, in the Rhône-Alpes region of southern France, back in 1783.
It's probably only the people of Annonay who remember this fact, and they certainly don't hesitate to celebrate it every year. On June 6th and 7th, head down for the Festival of Hot air Ballooning which they call L'Art de l'Envol (“The art of taking off”).
Visitors descend on the town for air shows, costumes, and of course, hot air balloons. While you're there, why not check out the rest of the town too – there's plenty more to see in Annonay.
Read more (only in French) here.
June 13th, Le Mans 24 Hours (Photo: AFP)
Endurance sports doesn't get any better than this, with the world's oldest active sports car race in endurance racing taking place over 24 consecutive hours. If you're not familiar with the race – held near the town of Le Mans west of Paris – the car is shared by three drivers who switch over at pit stops every few hours. The most successful racer is Denmark's Tom Kristensen who has won nine times.
Fun facts:
The Circuit de la Sarthe is the longest race course in the world.
The race will be covered by 2,400 journalists from 160 countries
Average speed on the track is 219 kilometres an hour
June 13th – Top 14 Rugby Final in Saint Denis (RC Toulon's winger Bryan Habana in action. Photo: AFP)
It's the biggest night on the calendar for the Rugby Top 14 as the top teams will battle it out for French rugby supremacy. Can reigning champions Toulon – who have had a superb record all season – win it again?
The event will be held at the Stade de France in Saint Denis, northern Paris. Grab tickets here.
June 14th to 18th – Vinexpo in Bordeaux (Photo: Vinexpo)
One of the major events of the year for wine enthusiasts, the Vinexpo in Bordeaux is set to celebrate its 18th year. On the table will be samples from 2,350 exhibitors from 42 countries around the world. France will get the lion's share of display space (63 percent), so keep an eye out for some quality local drops.
Fun fact: France is the world's biggest wine maker with an annual production average of 523 million 12-bottle cases.
Read more here.
June 21st – Festival of Music in France (Musicians perform outside the Louvre in Paris. Photo: AFP)
Imagine for one day only, the streets of France turned into a massive stage for professional and amateur musicians of every genre. Well, no need to imagine – that's exactly what's going to happen at the Fête de la Musique on June 21st — and it's free!
It was started by the ministry of Culture and Communication in France in 1982 and the concept has since spread to 120 countries and around 350 cities. Here, it shows no signs of slowing down. Music and dancing fans can expect a well-organized day of jazz, soul, funk, rock, electro, reggae, classical and much more, played in bars, clubs, concert halls and of course, on the streets.

(Mad hatter Pharrell Williams in concert. Photo: AFP)
If you've ever wanted to experience a music festival from inside a Roman amphitheatre, then June 24th is your lucky day. That's when the Festival de Nimes kicks off, headlined by US superstar Pharrell Williams.
As Pharrell sings in his smash hit “Happy” – “Clap along if you feel like a room without a roof”. While the lyric itself doesn't make much sense, you can't deny that there isn't a better place to sing it than a Roman amphitheatre, no? There are some other massive names who'll be performing at the festival (which runs until July 26th), including Sting, Lenny Kravitz, Nicky Minaj, Ben Harper, and Santana. (The stunning théâtre antique in Vienne. Photo: AFP)
Like jazz? Always wanted to visit central France's Vienne? Well then we've got good news for you.
Starting June 26th some of the world's most renowned jazz musicians will descend on Vienne for the annual festival – but there'll also be a chance for the young talent to have a go too. Yes, Vienne puts plenty of time into the emerging talent of jazz, so you might hear the next big thing before it's even become a little thing.
The town will be overrun with parades and marching bands – and there'll be plenty on for the kids.
For the full line up and more information, click here.
June 26th – 28th, Solidays Festival, Paris (Die Antwoord will be in France for the event. Photo: AFP)
Solidays is a popular music festival with a cause – to fight Aids. In fact, all of the performers are on stage for free, and the festival is run by volunteers. Despite all this, entry is only €89 for a three-day pass or €39 for the day. The concept was so impressive to billionaire philanthropist Bill Gates that he even turned up last year to find out more.
Keep an eye out this year for South African rap-rave group Die Antwoord, Xavier Rudd, and Angus and Julia Stone.
Check the lineup and get tickets here.
June 27th – Paris Pride Parade (Marchers at one of the previous Paris Pride Parades. Photo: AFP
The annual Pride Parade – known in French as the Marche des Fiertés – is one of the most colourful events of the year. The streets will be overflowing with people marching for the equality and pride of the LGBT community, an event that organizers think will bring in around 500,000 marchers.
Be sure to get there early if you want a good viewing spot of the 80 or so colourful floats – which will be travelling between Montparnasse and Bastille. If you want to join in the fun, the march is free so simply jump in. Keep an eye out for donation points at the Pont de Sully.
More information here.
June 28th, Paris Tropical Carnival (A performer from a previous year's parade. Photo: AFP)
Colour? Check
Dancing? Check
Music? Check
If that's your checklist for a nice walk down the street then you're in luck. Paris will play host to the Paris Tropical Carnival on the 28th, and it promises to rival the Pride Parade in terms of a colourful march through the French capital.
Of course, it won't be as big as the Pride Parade, but the energy will be on par, as Paris Tropical Carnival thousands of singers, dancers and musicians will gather and make their way through the streets of Paris on foot or aboard decorated floats.
It's a celebration of cultural diversity and freedom – and if you don't have the right kind of costume to take part then be sure to find a spot on the sidelines to cheer along.
Read more in French here.